EXPLORING THE NIAGARA FRONTIER: The Southern Tier’s war on porcupines

I have a love-hate relationship with porcupines, the giant tree-climbing rodent of the Southern Tier. 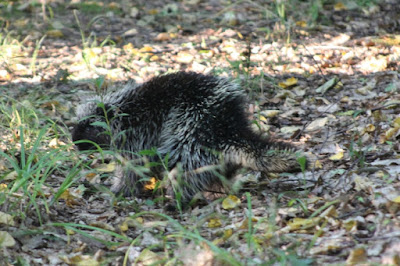 If I encounter the prickly creatures in the forest I can’t help but enjoy their cuteness. With their slow, ungainly walk and poor vision, they are easy to walk up on, which is probably why they have an armor of quills. They’d be defenseless otherwise.

In most cases, they are accommodating to your intrusion into their world, as they’ll come to a complete stop and allow you to get very close. Of course, I always stay at least 5 feet away. I can only imagine they think, “Get a little closer and I’ll show ya something!”

But, as fun as those meet-ups in the woods can be, I don’t like them anywhere near my campsite.

In such a location, they are pests of unmatched damage and danger. They will destroy outhouses, trailers, and cabins by munching on them. They will chew on the underbellies of vehicles to get salt which could lead to damaged brake lines, putting your life at risk.

As much as I like the beasts, for those very reasons I have to dispatch them when they are too near my domain.

But, while I let them thrive in their own environment, other people aren’t so accommodating.

Porcupines are marked animals in the Southern Tier, no matter where they might be.

Many residents down there, especially in the heavily-wooded sections near the Pennsylvania border, see them as a threat to their economy as porkies will girdle trees, break limbs, and chew on saplings and shoots, causing damage to the forests.

So, locals will kill every porcupine they see.

Not to jest, but that’s overkill.

The damage done to the woodlands are minimal. An adult porky might kill two mid-size trees a year (most of their girdling is survived). In forests as vast as those on the Allegheny Plateau, that’s not a lot. Plus, porcupine populations are low – they birth only 1 a year and are susceptible to predation by fishers.

But, you grow up in a lumber culture, you live a lumber culture. In some misguided way, the porcupine hunters are trying to save their quality of life. You can’t blame them.

But, you can when they can go too far and look at it as entertainment. On many spring and summer overnights, Southern Tier “hunters” will get in their trucks, see porcupines in their high beams or spotlights and get out of their vehicle to shoot or even club porcupines. The latter is a vicious, inhumane way to kill a wild animal, but it’s done in spades in the hills. It is not uncommon to see some roads littered with porcupine carcasses in June and July.

On deserted roads with no homes in sight, those bodies are a little sad – animals put to death for no reason…they haven’t affected Man’s properties, they won’t be eaten by their killers, and they’ve harmed no one.

There’s a war on porcupines and it’s one they can’t win.