EXPLORING THE NIAGARA FRONTIER: Alma Pond, one of the prettier kayak trips in WNY 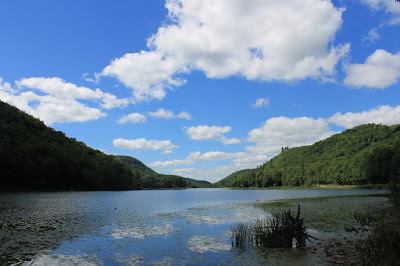 Back in 1928, Herbert Hoover wanted a “car in every garage”. If he were alive today, with that goal realized, his new slogan might be a “kayak in every garage.” Kayaks are everywhere. It seems like everyone has one nowadays.

Young and old, male and female, kayakers are all looking for a little adventure on the water and new places to explore. Once you’ve tackled all the usual suspects – the Great Lakes, Oak Orchard Creek, the Genesee River – you might want someplace different, someplace a little off the beaten path.

One of those diamonds in the rough that welcomes kayakers is Alma Pond. Located on County Route 38 in southern Allegany County, very near the Pennsylvania line, this gem offers one of the most beautiful paddling excursions in Western New York.

This is especially the case in late-September and early-October when the hills are ablaze with color. During the fall peak, there is something surreal about being on Alma Pond, you might think that you’re on some lake nestled in the Adirondack Mountains the way that the colors are over and around you.

That’s because Alma Pond is perfectly situated at the bottom of a deep valley. The elevation of the lake is 1,570 feet above sea level. But the peaks of the hilltops standing over the lake reach 1,900 to 2,100 feet and they do so in a hurry, creating a veritable wall of reds, yellows and oranges. It can give your senses an overload. You will find yourself just floating and staring, mystified by the incredible beauty.

Alma Pond’s unique setting was not really meant to be. Well, at least naturally. Long ago, it was just a small beaver pond on Honeoye Creek (which lends the waterway to its other name of Beaver Lake). But, in the early 1940s an earthen dam was built and then, 15 years later, a more permanent concrete spillway was added. The lake now sports a mile and a half of shoreline and covers 86 acres of territory. It’s not as large as the more popular lakes in Allegany County (Rushford and Cuba), but, at that size, and with interesting wild areas to explore, a kayaker can spend an entire day there.

Mind you, the water itself is not very pretty. It’s not clear as you would think a mountainside lake would be. No matter what time of the year, the water is turbid and murky. In the dog days of summer it will be green due to algae blooms (and harmless ones at that) and in other months it is light brown, something that the DEC chalks up to carp and suckers mucking up the water. The lake averages 4 feet in depth and its max is just under 9, so it doesn’t take much to discolor the water.

But, you aren’t there to look into the water. You’re there to see what’s on it and around it. 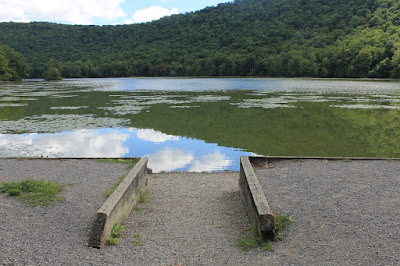 Although Route 38 parallels the lake, it’s not a heavily traveled road and you will be treated to relative solitude. The DEC’s launch site is for car-top boats only, so in most cases you will encounter kayakers and canoeists. You might see the rare, small power boat that is put in at the Alma Rod and Gun Club but they are few and far between and quite considerate – no one is revving their motors and there are no silence-killing jet skis.

That solitude and the miles of forest around the lake allow for some great sightseeing and some truly awesome bird watching.

In the early summer, you can certainly realize why many ornithologists cite the red eyed vireo as the most abundant bird of Eastern forests. Those same hills that awe you in the fall will sport an almost unbelievable number of the vireos signing to their hearts’ content. While on the lake you can literally hear thousands of the sprites at once.

The lake is frequented by fish-catching ospreys, too, who make easy game out of carp. They are always fun to watch as they dive-bomb the water.

But, the real avian attention-grabbers are the family of bald eagles that call Alma Pond “home”. This year, the pair gave birth to two healthy young. Bald eagles are always worthy of a photo op. Majestic. Rare. Beautiful.

The mammals that frequent this pond can also make for great viewing. Beavers, mink, deer, and bears frequent the southern shore. Who knows, sometime in the next decade or two, stragglers from Pennsylvania’s growing elk population might even make it here. 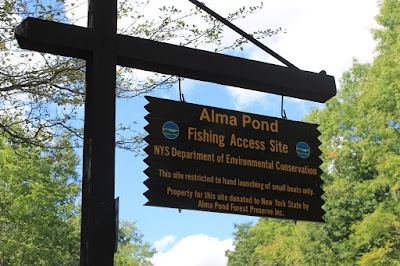 Plan to bring a camera to snap photos of all those critters -- and bring a fishing pole, too.

Despite a winter kill that really set back the fish populations a few years back, the lake sports excellent panfish numbers, a few pike, lots of carp (there are even carp tournaments held here) and a good population of largemouth bass, many of which approach 20” in length  -- a real trophy in WNY. There is plenty of structure to fish, because lily pads are plentiful and so are the stumps left over from the flooding of the valley. Even now, 70 years after the great flood, they still stand. This lake is also very popular with ice fishermen in the winter.

Alma Pond is located on County Route 38 in Allegany County in the town of Alma, which is southwest of Wellsville. It is 20 minutes away from the village of Wellsville and just 10 minutes away, by back roads, from Trout Run Campground, which is a popular destination for out-of-town campers.

To get there from Wellsville, take State Route 417 west out of Wellsville, then take County Route 18 south into Alma. When you get into Alma, turn left onto 38. The lake is just 5 minutes away from the very small hamlet of Alma.

The DEC owns 3,000 feet of shoreline along the lake, so you could put your boat in most anywhere along the roadside, or you could use the designated hand launch which has parking for 10 cars and a nice built-up and braced dike from which to picnic, fish, or sightsee.

When launching your kayak at the DEC site, you can head west, which goes to the wide open valley and a couple of cabins, and which can show a good sunset, or you can head east, with its narrower valley and unsettled wilderness-like setting. Anyway you put it, you won’t be disappointed…Alma Pond offers a real treat for kayakers, anglers, and nature lovers.