EXPLORING THE NIAGARA FRONTIER: Moss Lake – one of the few bogs in WNY 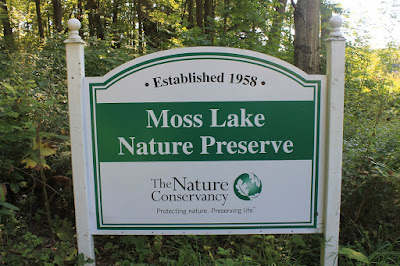 You might say that I’ve had a love affair with bogs that goes back decades. Back in the sixth grade, my science fair project was all about the acidic, mossy waterways where decay happens at a turtle-like pace. I have always been intrigued the living things hosted by bogs, which include some of the strangest plants in the world – like carnivorous plants – and a variety of rare birds.

Bogs are more of a northern thing, more likely found on the Canadian Shield. They are rare in Western New York. Only two come to mind -- Allenberg Bog near Salamanca and Moss Lake near Rushford. The latter is the subject of these week’s adventure.

Many readers of this column are familiar with the area, as they have might have a cottage on the shore of Rushford Lake or a hunting camp in the nearby hills of Allegany County. For any of those souls, or the leaf peepers who will be out in full force the coming weeks, a visit to Moss Lake is a worthy stop.

When travelling between Rushford and Caneadea on Route 243, you will want to take Sand Hill Road to the northeast. After a few hundred yards Sand Hill becomes a gravel road (which is in good condition). To your right, about two-thirds of a mile down the road, will be the entrance to Moss Lake. It is a single-lane driveway (so, travel with caution) that travels about 200 feet into the woods. The parking lot, if you will, is a dirt opening in the woods that can hold five cars.


Adjacent to the parking spot is a small picnic area with a nice, open view of the 15-acre lake, a third of which is covered by a vast mat of sphagnum moss. 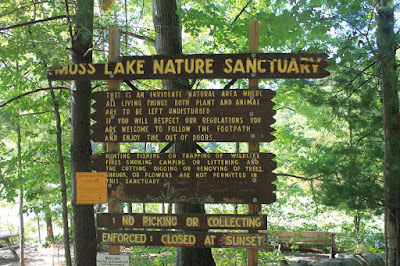 From that spot you can do as so many visitors do – throw some bread into the water.

“Throw some bread into the water?” you ask?

Yes, you won’t regret it. A sign actually encourages visitors to bring no more than two slices of bread per car.

Last weekend I saw some locals feeding bread to a snapping turtle there. I’ve seen some giant snappers in my life, but this one absolutely took the cake, besting some of the largest turtles I’ve seen by more than half their size. It was a beast, obviously a Methuselah of the turtle world. She is decades old – could she have been around during the Second World War? It’s a legitimate question to ask.

From the lot, you can head off to a nature trail into some old growth spruces, hemlocks, and pines which hold some nesting warblers typically found in the Adirondacks and Canada. About 200 feet in, you will walk across a foot bridge into even more coniferous trees. 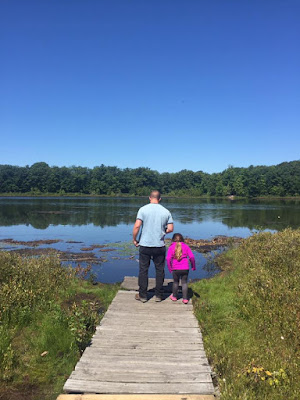 About a third of the way into your 1.3 mile hike, you will encounter a series of boardwalks that go out into the mossy regions of the lake. This is the highlight of the hike.

Whatever you do, DO NOT leave the boardwalk and walk onto the moss. For starters, you can break through the moss, but more likely, you will destroy the precious ecosystem by walking on it. Stay on the boardwalk and enjoy the plant life from there.

I was completely enthralled by the incredible number of pitcher plants that were growing on the moss. Their numbers far rivaled the population that I am used to seeing at Ferd’s Bog in the Adirondacks – and I thought Ferd’s numbers were impressive. At Moss Lake, there are literally hundreds of pitcher plants that can be seen from July into early October. You might remember that pitcher plants were the subject of a recent installment of this column.

If you come at the right time of the year, you will encounter 2 other insect-eating plants – sundews and bladderworts. Don’t pick any of these plants – leave them be and just take their picture.

Savor the moments and the views from the boardwalk, because it’s the boggy section that makes Moss Lake unique.

When done on the boardwalk, you can continue walking on the trail all the way around the lake and back to the parking lot. 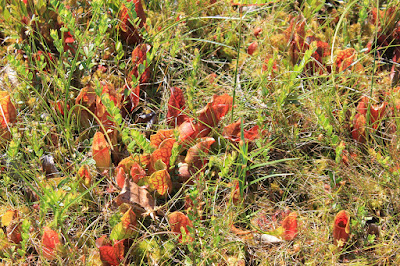 Just past the boardwalk, the forest becomes more mixed before becoming all deciduous. In that woods, you will see an incredible number of wildflowers, such as partridge berries, mayflowers, wintergreen and ginger. There are a wide variety of ferns to be found there, too, as well as edible wild blueberries and blackberries.

That last half of your hike will have you away from the lakeshore, but it’s still a nice hike nonetheless. You will see plenty of songbirds and, towards the end of the hike, you will find young American chestnut trees, some of the few remnants of a once great and abundant tree that was destroyed by an invasive disease.

The Moss Lake natural area is owned and nicely managed by the Nature Conservancy – all of the trails are in good shape and impact on the environment is minimized. It is open to the public from dawn to dusk daily. Years back, you needed a guide to take you on the hike but in recent years the Conservancy allowed access to the general public and the public, bless them, has done well in maintaining the integrity of this 82-acre gem.

Make it a point to visit this fall; you will see why the National Park Service designated Moss Lake as a registered natural landmark in 1973.  It’s worth an hour of your time…and maybe more.