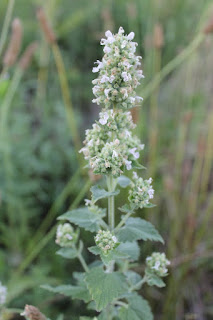 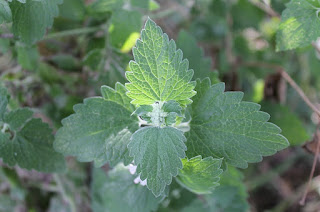 Allegany County is chock full of cat lovers. So, it’s only fitting that the county has an abundance of catnip growing wild. Here’s the buzz about that plant:

A transplant from Europe, which may have originally had its roots in Asia, catnip is a member of the mint family. Like all mints — including those more commonly ingested by humans — it has a square stem.

It has small white flowers with purple-pink spots that can be found in mass on spikes emanating from the stem. The leaves are somewhat ovate with heart-shaped bases and a little fuzz on the underside. The plant stands one to three feet tall when mature.

When you break the leaves or stems it has a distinct, unmistakable smell — it’s not so much minty as it is musky, kind of like cheap cologne.

Where to find catnip

Now is the perfect time of year to find catnip, as it is in bloom now through September.

It prefers full sun and drier soils and is one of the first plants to “reclaim” soils when plant life is removed. That means you can find it in good numbers on most farms around here, as they will grow on field edges, in pastures, and in barnyards.

Those who don’t live near a farm should also give a look at lawn edges, the outsides of abandoned parking lots, along our rail trails, or at construction sites throughout cities and villages.

Catnip for your cat

If you want to act like a drug dealer for your cat and give her a good time, pick her some catnip.

Rather than the dry, wimped-out mix that is found in pet toys, wild catnip, of course, will be more potent and your cat will love you for it.

You can pick a whole plant and give it to a cat. She will roll around on it and become euphoric. It is the smell that does it — it binds to their olfactory receptors and gives them incredible pleasure (there is no known plant that has that same effect on humans). The “high,” if you will, will typically last no more than 10 minutes as the cat’s sense of smell actually becomes overwhelmed, even fatigued.

If you notice your cat eating and licking the stems and leaves, don’t worry. She won’t O.D. or get sick; she is only doing that to break the plant and release more smells.

If your cat has no interest in catnip, don’t worry about that either. It does not mean she has no sense of smell. Appreciation of or resistance to catnip is hereditary — two-thirds of domesticated cats dig the weed.

If you want to save catnip for later use, you can do that. Pick it, dry it in shade and then crumble and save the leaves and stems in a Ziploc bag, away from moisture.

Catnip for your consumption and use

Humans have long had an affinity for catnip, though it is only a fraction as popular as it once was.

People cannot get high off the plant, even though the Journal of the American Medical Association said otherwise in the late-1960s. That controversial article was proven to be bunk as it featured photos of marijuana (identified as catnip) and described catnip’s appearance as looking like marijuana (not even close). The scientist who did the study had no working knowledge of botany.

The reason that catnip is here is because enterprising Europeans brought it here in the 1700s as a commercial crop for human consumption. As with all mints, it has its use in tea. You can steep the leaves (green or dried) for a powerful, maybe pungent tea, almost like the citrus-based bergamot oil used in Earl Grey tea.

Over the centuries, people have attributed its herbal magic to these and other powers:

Beyond ingesting the plant and its oils, people have use for catnip as an insect repellent. Many old-fashioned mosquito repellents featured catnip and some folks will walk around with a sprig of it in their shirt pocket to keep biting insects away.

Hardcore all-natural gardeners will plant catnip around and in their gardens as it allegedly keeps insects off their crops. As we get away from GMOs and pesticides, this use for catnip is actually seeing a major resurgence.

Catnip is an interesting plant and one of the few alien species that is a welcome, unobtrusive addition to our local environment. Give it a try — for your cat, for you, for your garden.

Posted by Bob Confer at 8:16 AM No comments:

If any one thing could account for the past successes of the Western New York economy, it’s water.

When the Erie Canal opened in 1825 it made the region the gateway to the West, offering a navigable trade route connecting the Atlantic Ocean to the Great Lakes. It was an engineering wonder that cut transportation costs by 95% and improved delivery times by weeks. WNY became a commercial hub and Buffalo one of the most important cities in the United States.

But, the golden years of the Canal lasted about a half-century. It was made almost useless by the advent of the United States’ vast rail network that, by 1869, connected coast to coast.

It wasn’t long after that, though, that the area experienced yet another economic boom driven by water. In the late 1800s, power plants began to develop along the Niagara River, including the world’s first large-scale power plant to produce the alternating current so important to the efficient delivery of electricity. That technology harnessed the limitless power of the River to create vast amounts of electricity and power industry. Whereas many other cities saw electricity as a luxury, Niagara Falls was able to take it for granted. This brought manufacturers by the droves to the Falls, which became an industrial Mecca for the first half of the twentieth century.

But, after World War II, things changed. Affordable electricity was no longer specific to WNY. Vast hydroelectric projects popped up all over the country and power generation technologies that used coal were refined in the 1920s and again in the 1940s, making that an accessible and cost-efficient means to power homes and businesses. Niagara Falls lost its edge. Then, it lost its businesses and residents. Now, in parts, the corridor along the River looks like a manufacturing ghost town. The City’s population is less than half what it was in 1960.

But, there is hope, hope from that substance which boosted our economy in days gone by: Water. It’s an asset, a resource that can and likely will bring about a new age of prosperity to WNY. In the very near future, if not right now, water has a very good chance of being the new oil, a substance so finite in supply and so necessary that governments (even neighboring municipalities) will compete for it and sell it at a premium.

We’re fortunate here in WNY that water abounds. We have the Great Lakes, the mighty Niagara River, and hundreds of streams, ponds and lakes filling our landscape. Other places, including those where WNY’s former businesses and people migrated to, aren’t so lucky. There, water is at a premium. There’s barely enough now and they are guaranteed to be lacking in the future if neither populations, usage, nor climate change decline. Texas, Arizona, California, and even Georgia are just a few of the states that have experienced absolutely frightening water woes in recent years. Just look at how dire the situation is with the Colorado River and Lake Mead where the reservoir is at an all-time low of 28% of capacity.

Having what we have and being near what we are -- we are within 500 miles of 25% of the world’s freshwater (yes, the world’s) -- puts us in a unique position to rise from other regions’ and peoples’ despair and correct society’s wrong-headedness in building vast cities in areas that had shown a history of recurring long droughts. Corporations and people need certainty when it comes to water supply and you can’t get much more certain than our backyard.

It’s something that some local leaders have seen coming. Over a dozen years ago the Niagara County Center for Economic Development began marketing the region to water-intensive industries in hopes of attracting new businesses. It’s something that they continue to this day – in their 2020 Comprehensive Economic Development Strategy for the county they noted this about H-two-O:

Freshwater is the most important natural resource in Niagara County. In addition to fueling the Falls, it drives the production of hydroelectricity for homes and businesses, it is used in manufacturing, and it provides drinking water to sustain current and future populations. It is also used to irrigate prime farmland, a natural resource that helps provide fresh food and value-added products to the local population and products for export.

Until only recently, very few development agencies in the Great Lakes had followed suit – despite the seriousness and scale of the growing water shortages and how water could be a silver bullet for ruined economies like Detroit’s. This has put Niagara County in the lead based on both moxie and available resources.

It is hoped that their continued efforts and the frustrations of southerners and westerners combine to bring companies both big and small – and people -- back to the region. We definitely have the resources and we must use them (intelligently, though, with an emphasis on the state of the environment and the conservation, cleanliness, and reuse of water) to recreate a robust WNY economy, and a place to live and thrive, for this and future generations.

Posted by Bob Confer at 8:14 AM No comments: