EXPLORING THE NIAGARA FRONTIER: It’s not a copperhead – it’s a milk snake 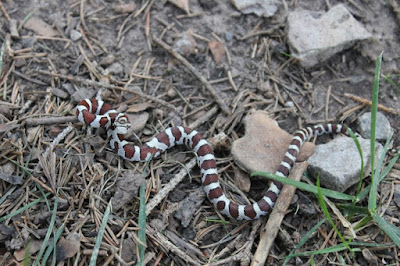 It’s not uncommon to hear tales of people claiming to have encountered poisonous snakes in Western New York, specifically water moccasins and copperheads.

In all cases, the person is dead wrong in the identification of the snakes. Neither of those species can be found here. There are no copperheads in New York outside of the Catskills and there are no water moccasins north of Virginia.

What happens is this: Our resident northern water snakes are confused with water moccasins (also known as cottonmouths) while eastern milk snakes are misidentified as copperheads.

Milk snakes do have, to the uninitiated, a copperhead-like appearance. Copperheads have brown bands contrasting a lighter brown base. Adult milk snakes have brown blotches (versus bands) on a lighter base, but their base tends to be more steely grey. Young milk snakes will sport reddish-chestnut blotches on a brighter, silvery, almost white background. Also, the heads of copperheads are unmarked, while milk snakes sports blotches and a tell-tale “v” at the top of the neck.

What might add to the confusion with copperheads is the aggressive behavior of milk snakes. These snakes will coil and snap at you if you try to pick one up. That makes them one of the least popular of the wild snakes among those who raise reptiles as snakes.

They also have a couple of other tricks to show their displeasure to us. They can secrete a rancid musk and they will also vibrate their tails on dried leaves to create a rattler-like sound effect.

Milk snakes are fairly common but rarely seen because they are nocturnal while also being excellent burrowers. You can find them under logs, rocks, and lumber. If you do see one slithering about during the day, it will likely be a smaller one (12” or less). August and September are the best months to see them as the young of the year are out exploring during the day and trying to stake out their own territories.

Healthy adults can be impressive specimens, as they can reach 2 to 3 feet in length. They get that large by feasting on mice, birds, and their own – they will eat snakes and they don’t care what species it is! Some studies have shown that as much as 25% of their diet will be snakes.

Milk snakes are constrictors. Rather than doing as most snakes do, that is, swallowing live, wriggling creatures which are probably uncomfortable to eat, they will wrap their bodies around their prey and suffocate them by doing so. Then, they will swallow the dead creature whole.

They are called milk snakes because a long held myth said that they frequented barns because they sucked cows’ teats at night when no one was looking. We all know now that’s silly – snakes don’t drink milk and they don’t have sucking mouth parts.

We do know that they thrive on farms by hiding in hay piles and under structures, where they can feast on the mice and rats that are common to feedlots.

If you see a milk snake, appreciate it. Don’t pick it up unless you like snake bites (nonpoisonous ones at that). And, whatever you do – don’t kill it. For some reason, too many people feel compelled to kill snakes, which is just plain wrong. That’s a subject for another column.