EXPLORING THE NIAGARA FRONTIER: Peepers – coming to a spring near you 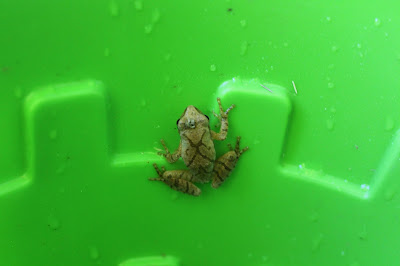 After getting spring fever during February’s unusual warm spell we were brought back to reality by this week’s winter storm.

As you peer out your window it doesn’t look like spring is less than a week away. But it is. As a matter of fact it has been to a certain extent with the return of good numbers of robins, bluebirds and other songbirds and their symphonies.

By the end of this month, Western New Yorkers will be greeted by another melody but from an entirely different creature – a diminutive amphibian, the spring peeper.

Late-March to late-April marks the breeding season for peepers in the northern portion of Western New York. The southern half, especially the southern third closer to the Pennsylvania border, might see peepers breeding into the first week of May due to the cooler temperatures associated with the higher elevations and the deep valleys.

While this breeding season is underway, peepers court one another with, well, peeps. If you live near a pond, marsh, or slow moving stream, head outdoors a few hours before sunset and for forty minutes after. That birdlike pee-eeep, a half-second long in duration, sound comes from these male treefrogs.

If that watering hole is the pick-up joint for dozens if not hundreds of peepers, the collective sound (which some have compared to sleigh bells) is amazing. Together, it becomes a high-pitched trill which can be deafening. This year, to prove my point, I will be bringing home from work my newfangled noise meter to measure how loud their calls are. Last spring’s cumulative chorus at our pond was overwhelming. Could it exceed 90 decibels? We’ll see, and I’ll be sure to follow up with a note in this column.

It’s truly amazing how much sound can come out of a creature so small. Spring peepers are three-quarters of an inch to an inch-and-a-quarter in length. They are wee animals, far smaller than their cousins, the toads and frogs (as a matter of fact, most frogs could eat them). They are light brown to grey with a dark diagonal cross or “x” on their back.

You’ve likely never seen a spring peeper – they are not only small, but they are timid. If you get close to their breeding pond, they will stop singing and hide.

Next month, when they are done increasing their populations, the peepers will leave those ponds and head into the woods to climb trees and grasses to spend the rest of the year feeding on small invertebrates.

Despite their secrecy, they are among the most abundant amphibians on the Niagara Frontier, as made evident by their calls alone.

If you live in the city and never had the chance to listen to spring peepers, make it a point to drive out to a wetland like the Iroquois Wildlife Refuge or Tifft Nature Preserve to catch the spring peepers in action in the coming weeks. Their choruses are interesting and one of the true, honest-to-goodness signs of spring.