EXPLORING THE NIAGARA FRONTIER: The brown creeper – the ultimate in avian camouflage 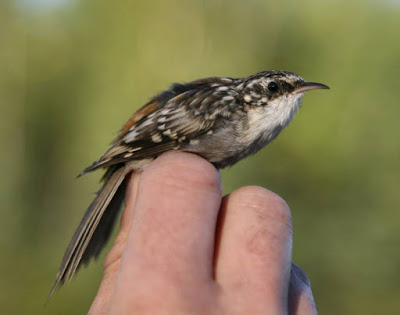 Long before the colorful warblers make their way through here in May when the trees are leafing out and the warblers’ preferred meals of flying insects abound, our early spring woodlots, which seem drearily brown, are graced by a bird that many might consider equally dreary in appearance – the plain hued brown creeper.

But, as with all things in nature, at a closer glance, you will find that this diminutive feathered friend is, in his own way, just as beautiful as those warblers.

I for one find creepers to be utterly fascinating because their camouflage is bested by only a few in the entire bird kingdom (whippoorwills and ptarmigans immediately come to mind). It is a two-pronged cammo, too – they can make themselves difficult to find by both sight and sound.

Creepers are hard to see


Brown creepers do just as their name implies – they creep. They will fly to the bottom of a tree, creep their way up quite a distance, fly away and then creep up another trunk.

They do this in their tireless search for dinner. Whereas the aforementioned warblers flitter about in warm weather chasing down active flying insects, creepers crawl up trees looking for slow moving or stationary creepy-crawlies in every nook, cranny and furrow of a tree.

Being a slow mover who likes to have their beaks and eyes to the wood, they could be considered fair game to predators like sharp-shinned hawks and weasels. But they aren’t – no one can see them.

Not only are creepers small (5” in length) and slender, they also blend in with their surroundings
perfectly.

While their bellies might be white, they are always pressed against a tree. It’s their backs that are exposed to the rest of the world. Those backs are an excellent streaked mix of browns, tans, and white that match the bark they are climbing. They can’t be seen from behind and you can only hope to catch a glimpse of them from the side, or while flying, to know they are there.

Creepers are hard to hear


Many birders who might not have seen creepers at first are notified of their presence by their unique call. It is a very high-pitched note that bird books say sounds like tsee.

But, at the same time, it is so high-pitched that many other birdwatchers can’t even hear it. Older folks or those who might have worked in a factory can’t hear it at all. It is beyond their range of hearing.

On top of that, the pitch is just right and sung into the tree trunk that the bird is virtually a ventriloquist. Even in a small woods it can be difficult to pinpoint where the sound is coming from.

Where to find creepers in WNY


Brown creepers can be found in woodlands and are most abundant in the early spring when those that had made their way south for the winter are passing through en route to Canada.

Even so, many live here all year.

The creepers prefer to live and breed in older, larger forests, so here in WNY you can find them nesting in fair numbers underneath the same bark upon which they feed (using an unusual hammock-like nest) in the higher elevations, especially closer to the Pennsylvania border.

But, on the lake plains it’s a different story. Past editions of the NY breeding bird atlas show only a spotty presence of nests in Niagara and Orleans counties, perhaps something that be chalked up to smaller forests and more farmland, really restricting the birds’ access to the dead trees (and their insect infestations) that they prefer. When the next atlas is produced, though, I wouldn’t be surprised to see more nesting creepers found in those counties due to the numerous woodlots that have taken over former small family farms.

The good news is that unlike many forest songbirds, the brown creeper’s population has been on an upward trend across the Empire State since 1965.

But, that doesn’t necessarily mean you’ll see them.

They aren’t rare – as a matter of fact they’re almost common in places; it’s just that they hide well, sporting some of the best cammo out there. So, if you see one this spring, consider yourself lucky…and probably possessed of good eyesight or good hearing.


Photo courtesy the US Fish and Wildlife Service
Posted by Bob Confer at 8:17 AM