EXPLORING THE NIAGARA FRONTIER: In appreciation of the dandelion -- the Rodney Dangerfield of wildflowers 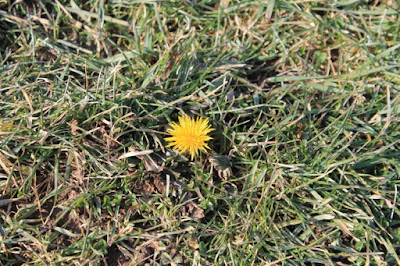 Whole industries have been built upon the destruction of the dandelion.

Think of how often you see the Lawn Doctor’s trucks staged in a neighbor’s driveway; or ponder the advertising and packaging at your local hardware store that’s focused on dandelion eradication through the likes of sprays like RoundUp.

That poor little flower is like the Rodney Dangerfield of the wildflower kingdom – it don’t get no respect!

Let’s buck the trend and take an appreciative look at that plant, and hopefully change your outlook on the flower that so many dismiss as a lowly weed.

When the snow melts and Western New York is a conglomeration of mud and brownish grass it seems like it can take an eternity before the trees leaf out, the fields flourish and the lawns turn green. Sometimes, it does – we can go two whole months before color returns in earnest.

Thankfully, the dandelion arrives and makes our March and April a little more bearable. They, along with the similar-looking coltsfoot, are typically the first flowers of spring. The bright, circular yellow flowers brighten any dull landscape.

When they do this in great numbers in a lawn, most people look at them as a threat. A threat? I enjoy the sea of yellow that will take over my yard within the next month while awaiting my maples and tulip trees to open their buds. It’s beautiful.

Need further a perspective of beauty? Take into consideration the unusually warm February weather that we enjoyed last week. That got everyone outdoors, hiking on nature trails and gallivanting in parks. But, it was, for the most part, a sterile, dead landscape. Not surprisingly, though, some dandelions were in bloom. Think about that – on Feb. 19 , in normally arctic Niagara County, brilliant wildflowers reached to the sky to share their beauty with us!

Dandelions are the flowers of early childhood


I don’t care if you live out in the sticks, in the ‘burbs or in the Big City…dandelions are everywhere. That omnipresence and their delightful, sun-like appearance makes them the first flowers to be identified by most any kid.

That coupled with the fun they bring to those kids makes them a beloved wildflower.

Think about the fun you had as a youngster, picking the flowers and following this routine: “Momma had a baby and its head popped off.”

Or, how many times have you seen your children grab the white, puffy heads once the flowers have hit seed-stage, blowing on that cotton cuteness and sending the seeds all over creation?

All of that makes the dandelion a gateway plant of sorts, as it introduces kids to the wonders of wildflowers.

Dandelions are good to eat


From mid-March to Memorial Day, dandelion leaves provide excellent table fare. Later in the year, they are acidic and bitter in taste and need some extra handling to make them palatable.

But, for the next few months, dandelion greens can bring flavor, attractiveness, and nourishment to your salads. The same can’t be said for other plants like iceberg lettuce which has almost zero nutritional value. The dandelion is the complete opposite of lettuce, as it is absolutely chock full of
healthy goodness: One 100 gram serving sports 14,000 international units of Vitamin A, 0.19 mg of thiamine, 0.26 mg of riboflavin, 198 mg of calcium and 397 mg of potassium.

That’s an impressive slate of natural goodness. It’s a veritable superfood…one that you can cultivate from your own backyard with no gardening necessary!

Dandelions are good to drink


I am a teetotaler, so I can’t state unequivocally that dandelion wine is something special, but I’ve read enough praise about it to know that it is. With a flavor close to sherry, the beverage – which is more appropriately a liqueur than a wine -- is revered, especially by those in rural environs where they can pick dandelions by hundreds in any hay or alfalfa field or pasture.

A cursory search on the internet will show dozens of wine recipes using the flower heads, and the most popular ones use ginger, lemon, and orange rinds on the ingredients list. The recipes seem easy enough and it appears that even the least accomplished homebrewer can make a decent batch of tasty dandelion wine. It might be something for you to experiment with this spring.

If you’re not into alcoholic beverages, you could also dig up the deep, strong roots and roast them in an oven. From there you would pulverize them and use them as a coffee substitute. That root is as healthy as the leaves and has long been respected as a herbal remedy for liver problems and anemia.

I could write many more pages defending the lovely dandelion but I think you get my drift – the disrespected yellow sprite is not something to despise. It’s something to love. Dandelions are nice to look at, play with, eat and drink. Not many plants can share such a versatile claim to fame.