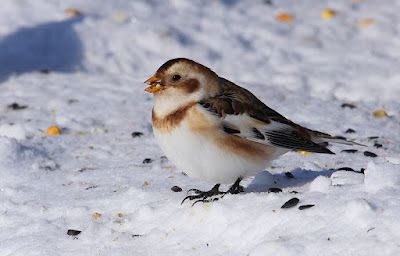 Everyone has their “official” sign of winter. They might consider the start of Jack Frost’s domain to be the first snowfall of the season or maybe Thanksgiving or the winter solstice.

As for me, I prefer to be look to the songbirds, just as others might with the first signs of spring.

In the spring, folks look for the return of the robins or red winged blackbirds. Later in the year, I don’t consider winter to be in effect until the snow buntings arrive.

These visitors from the Far North will arrive in Western New York anywhere from the third week of November to the second week of December. This year, I first saw them on the Sunday before Thanksgiving. While we had no snow to speak of on the lake plains of Niagara County, the Southern Tier got socked with snow that weekend, so the birds were pretty accurate in predicting when all the fun would start.

These small cousins of sparrows hail from Northern Canada and Greenland, right on the tundra and far above 60 degrees latitude where the True North starts. They spend their summers there feasting on seeds and small insects in the arctic landscape and from beaches along the Arctic Ocean. They make their nests farther north than any bird in the world.

Their winters are spent all across Canada and in the northern third of the contiguous 48. A few stragglers will make it as far south as Tennessee. They can winter farther north than any other bird except the raven.

As they do in their breeding grounds, snow buntings prefer wide open spaces when they are in our company. You can find them in good numbers in winter wheat fields, bean fields, and golf courses where they search out weed seeds. A few lucky birders will even get them to visit bird feeding stations.

If you live in an ag district you have more than likely seen these sprites in the winter. They are especially fond of roadsides in farm country, supplementing their seed diets with salt from the road. You will see flocks of a dozen to two dozen birds at a time, all taking off at once in a mass of wild, fast flight.

This time of year they sport egg-white underbellies while their white tops are heavily dusted with brown. In the summer they look completely different and no doubt offer stark contrast to their nearly sterile breeding grounds. Then, they are brilliant ghost white with a patch of black on their backs – really beautiful birds.

They are so beautiful that they are forever immortalized in song. We here along the Canadian border are very familiar with Anne Murray’s classic song “Snow Bird”.

As pretty as they are, though, just like Anne did, we can’t wait for them to leave in March as better weather and better times are on the way. As the song goes…