EXPLORING THE NIAGARA FRONTIER: After recent decline, wild turkey populations are on the rebound

Over my 42 years I’ve seen some significant swings in wild turkey populations on the Niagara Frontier. 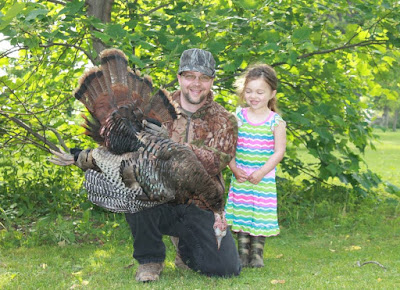 Over the first half of my life, turkeys were common in the Southern Tier but downright uncommon in Niagara County. I can clearly remember riding the school bus through the town of Hartland and getting excited every time I saw a longbeard out in a field. I couldn’t wait to tell my dad when he got home from work.

But, after I graduated from college, it was like a whole new world for turkeys.

Their population exploded and they became abundant in Niagara County, matching the success of Allegany and Steuben Counties. Large flocks were the norm.

Their numbers peaked in the first decade of this century. You could see that in the turkey harvest numbers for Niagara County: In the spring huts of 2007 and 2008, local hunters bagged 423 and 444 toms, respectively, while the less-popular fall hunt saw a peak harvest of 91 birds in 2006.

But, in less than 10 years, fortunes have changed dramatically. There are fewer flocks and smaller flocks locally. Look at some recent harvest totals: 2014’s spring hunt saw just 149 toms taken in Niagara County, while 2015’s take came in at 148. The fall totals have been abysmal. In 2014, Niagara County hunters took 27 birds. In 2013, they took only 8. Yes, 8 (that’s not a typo).
This is not an issue unique to the Lake Plains. Numbers all across the western half of the state have plummeted. In Allegany County, for example, May 2015’s harvest was just 30% of the 2007 peak. I hunted there every weekend of that May and this past May and encountered just one tom…the hills and hollows from where their gobbles used to echo were eerily silent. It was a little depressing.

This is not a result of overharvest. Two factors have contributed to the decline.

Recent springs were not kind to turkey chicks – as a matter of fact, they were devastating. After warm starts to each of the Mays from 2012 through 2015, the weather changed for the worse. Wet and cold came as the young hatched and there were mass die-offs. The turkeys were unable to replenish their populations for an incredibly long period of time.

Also, many conservation professionals believe that Lymphoproliferative Disease Virus (LPDV) struck many flocks. LPDV is a disease that foreign trade recently brought from Europe. The sickened birds get lesions on their skin and even on their internal organs. These pox-like lesions cover their eyelids (making it hard to find food or see predators) or fill their throats (making it impossible to swallow). So they either starve to death or are easily taken by coyotes.

These weather and disease conditions led to some really dicey times for turkeys and the outdoorsman who have enjoyed their exciting hunts and tasty table fare. The Department of Conservation became so concerned that the fall turkey hunt, which was a month long in the Southern Tier, was cut in half, to just two weeks in an effort to limit the take and allow the birds to flourish.

It proved to be a wise decision and one of absolutely perfect timing.

This past spring was warm (we actually saw 90 degree days in May) and dry (it marked the beginning of a sustained drought). Hen turkeys had healthy, large clutches -- sometimes, Mother Nature overcompensates when populations wane and she did it this year. Poults were incredibly abundant and they took advantage of a great summer to grow into large flocks of young adult birds. In the summer survey, the DEC and its volunteer observers saw more flocks of turkeys than they have since 2002.

I’ve seen and heard of the rebound myself. Last week, I saw a flock of 18 turkeys in a woodlot in Niagara County that typically held no or few birds. A month earlier I saw a flock of 12 in the Allegany County territory that had been devoid of them this spring. And, I’ve been told of large flocks frequenting the valleys of Steuben County and the woodlands of Newfane.

In just this one year alone, local turkey populations made a quantum leap to get closer to previous numbers. They’ve got a long ways to go, but this year certainly gives wildlife officials, turkey hunters and bird watchers hope for the future.