EXPLORING THE NIAGARA FRONTIER: The rough-legged hawk – visits from an arctic raptor

When snowy owls make their periodic irruptions into the northern states, those beautiful birds get all the ornithological press. That often overlooks the other feathered friends that visit us from the far north like redpolls, grosbeaks, and crossbills. 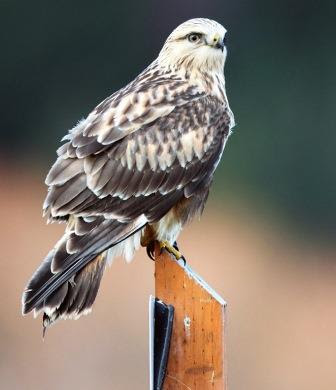 Another northern bird that gets little attention is the magnificent rough-legged hawk, which sits right at the top of the avian food chain with the snowy owl.

The rough-legged hawk spends its summers in the treeless arctic tundra, feeding on what can be vast numbers of lemmings. And, just like the snowies, their population is totally dependent on the cyclical boom and bust of lemming populations.

Their winters are spent in the lower tenth of Canada, and the upper half of the continental US, with most of these flying hunters spending their time in America’s vast grasslands and plains as those landscapes most mirror the look and feel of their breeding grounds.

The hawks can be found in Western New York in far lesser numbers, frequenting large open fields and marshes as they search for mice and voles. Even living out here in farm country they are an uncommon sight for me; I might regularly see 1 or 2 birds a winter who have staked out a temporary home here.

Last weekend while going on one of our adventures, my five year old and I spotted a rough-legged hawk in our pasture, the first one she’s ever seen. And, they always make for excellent viewing whether in appearance or behavior.

They are members of the buteo (large hawk) genus, the same as the common red-tailed hawk who they share the winter hunting grounds with. The rough-legged hawk is 3 inches shorter than a red-tailed hawk and they look considerably less bulky than a red tail.

They get their name from the feathers that extend all the way down their legs and to their toes, which is a must-have for the frigid weathers they frequent. It is unlikely that you will get close enough to see those pantaloons, but you can still easily tell them apart from red tails in other ways.

Rough-legged hawks come in two color phases. The light phase, shown in the photo, is strikingly beautiful. The lower half of the body and the wings are tawny dusted with white, while the breast, neck and head are white sprinkled with small brown streaks. The dark phase is attractive in its own way – those birds are completely chocolate brown with only a hint of white feathers, except in flight when the white/grey underwings can be seen.

They hunt differently than our red tails, too. You’ll see red tails watching their fields from the tops of power poles or from large, high branches of oaks and maples in the adjoining hedgerows and forests. You’ll never see them on skinny limbs on little trees close to the ground. Rough-legged hawks you will, though. And, their methods of hunting in flight are different as well. A red-tailed hawk will soar and ride wind currents and thermals. A rough-legged hawk will do that, but they will also do something that only two of our local birds of prey (kestrels and ospreys) will do – and that is hover. They will powerfully flap their wings and stay in one spot when they catch glimpse of prey below them. From that hovering position they will dive onto the vole that has whet their appetite.

The rough-legged makes for some exciting birdwatching in the winter months. The next time you find yourself taking a Sunday drive through farmlands bring along a pair of binoculars and savor this rather unappreciated winter visitor.