Exploring the Western NY Wilds – Jack-in-the-pulpit: A test of manhood 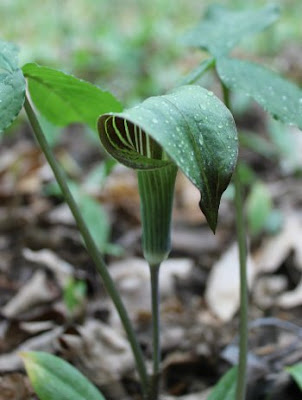 The spring produces the most beautiful and interesting wildflowers of the entire growing season. One of those plants that are especially interesting is now in full bloom in Allegany County. The Jack-in-the-pulpit has a storied history, especially among Native Americans, as it was once a measure of one’s manhood.

A member of the arum family, the Jack-in-the-pulpit cannot be confused with any other plant in the area. Located beneath a set of three large leaves is the uniquely-shaped flower. The spathe (or “pulpit”) is a curved hood that is greenish to purplish-brown in color. If you lift that hood, you will find inside the pulpit “Jack”, more appropriately known as the spadix (the reproductive organ of the plant).

The spathe protects the spadix from rain, which would wash away all of the pollen. The plant, which can actually alternate between sexes, is pollinated by insect attracted to a rotten smell emitted by the plant (which humans can barely smell). They head into the pulpit where smaller insects can move in and out freely, but larger insects can become trapped and die inside the base of the pulpit.

The Jack-in-the-pulpit can be found in moist woods with rich soils. The flower is in bloom throughout the month of May. Later in the year the flower will be replaced by a tight cluster of shiny red berries that appears to be one solid, bumpy mass.

A test of one’s manhood

The Jack-in-the-Pulpit had its place in Native American tradition. Many tribes used it as one of the capstones for a boy’s coming of age. If the boy could eat the root of the plant, he was considered a man.

The root (corm) was considered hot, hotter than the hottest pepper on Earth, and it took a man to fight the pain and agony.

Now that we know more about the plant we know that it isn’t hot like a pepper. Whereas peppers get their “heat” from the chemical capsaicin, the pain elicited from Jack-in-the-Pulpit comes from calcium oxalate. It is present as microscopic crystals in raw corms. Those crystals tear flesh and, at the same time, poison the torn flesh.

The crystals can tear the tongue, throat, esophagus and stomach so badly that blisters and open sores develop in the body.

If someone ate multiple corms to prove that he was a real man, there was a very good chance that he would have died as the throat would have closed up and he would have suffocated. If he survived, he would have to contend with a bout of kidney stones from a collection of the calcium oxalate; pain in, pain out.

Oh, the things men will do to show off their machismo!

While Jack-in-the-pulpit might have proved unpalatable, even deadly, in the test of manhood, Native Americans did find use for the plant, especially that same noxious corm.

The corms are so nutritious that Native Americans used to harvest them in large numbers. To eliminate the poisonous, painful nature of the plant, they would slice it thinly and then let it dry for a few months in the summer heat. Interestingly, such practices were utilized by other cultures throughout the world to consume other members of the arum family that have similar nasty characteristics.

The indigenous people would use the Jack-in-the-pulpit as a healthy starch, eating it like a small potato or they would pulverize it into flour and make bread, which was the most common use of the plant.

They also made a marinade from it that was used to flavor venison.

If you are out in the woods this weekend, keep your eyes open for this interesting and formerly useful plant. But, whatever you do, don’t test your manhood. If you do, you’ll regret it.

Plus, why kill the plant just to pull off a stunt? Jack-in-the-Pulpits can live to be 100 years old ― let them thrive.