When you go out and about in the local forests to enjoy some much-needed warmer days this month and next, you might encounter a surprising sight -- a mourning cloak butterfly.

This fair-sized butterfly (about the size of a monarch), always catches hikers off guard because butterflies are the insects least expected to be seen as we climb out of the cold of our long winter. After all, aren’t they insects of the summer months, appearing weeks after they entered the world as caterpillars?

Mourning cloaks are different. They actually hibernate and can survive our harshest of winters as adults, even when the temps drop below zero. Other species of Lepidoptera winter-over in cocoons or as eggs. To survive Jack Frost, mourning cloaks will search out sheds and brush piles, hide on the undersides of eaves, and go under loose bark on trees. These butterflies are so fond of cooler climes that you will rarely see them in July and August when they aestivate, which is a summer version of hibernation undertaken to ride out hot and dry spells. 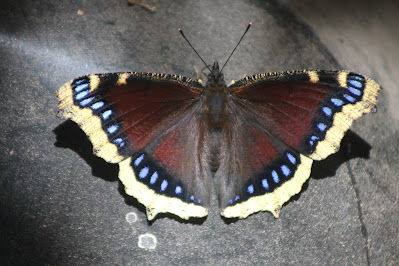 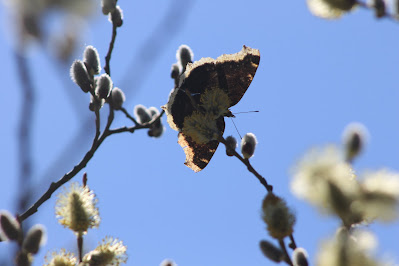 Mourning cloaks get their name from their black wings which look like the clothes someone would wear in grief. From a distance, they do look plaintive, even totally black in flight. But, in closer inspection, you will see some stark beauty. The black wings have a tan-hued (sometimes yellowish) fringe. Just inside that fringe are six to eight blue dots per wing. The undersides of the wing look like weathered wood, giving the butterflies camouflage when their wings are closed. They are gorgeous butterflies no matter the season and especially so in early spring when the forests have yet to green out.

But, they sure don’t look pretty when they’re babies.

Their caterpillars are ugly little critters, about two-and-a-half inches long, a bluish black with a row of red spots on their back with countless branching spines sticking out of them. Their appearance screams “don’t touch!” And, don’t…the hairs on those branched spines are stingers and they don’t feel good at all.

Those caterpillars can be problematic at times, as they feast on the leaves of poplars, willows, and elms. When in good numbers, they used to defoliate trees.

I say “used to” because here in Western New York mourning cloaks are not as common as they once were because their preferred food isn’t either (which is no fault of these caterpillars). Elm trees once dominated the appetites of mourning cloaks, so much so they were known as “elm worms”. Elm are virtually nonexistent, wiped out by Dutch elm disease, which was a killing fungus allowed to flourish by bark beetles. You’d be hard pressed to find a healthy elm over 25 feet in height anywhere in Western New York, let alone saplings in any number.

When I was a kid, elms were still fairly common, but nothing in size like they used to be decades earlier. But, they still gave plenty of nourishment to mourning cloaks and that’s why I saw more of the critters when I was a kid. Back then, on any given spring day in the woods I’d see a few mourning cloaks. Now, I might see a few over the course of the whole spring.

They are a spectacle nonetheless, one to be admired when you are out exploring the wilds of Allegany County.