EXPLORING THE NIAGARA FRONTIER: Ridgewalk – explore WNY’s wilderness for a good cause 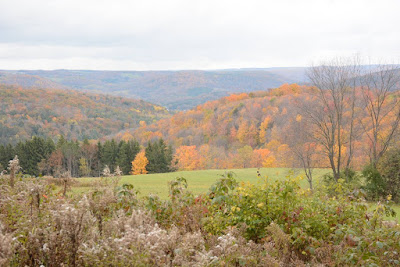 Many readers of this column hail from the lake plains (where the terrain can be flatter than a pancake) or from the middle portions of Western New York (where gentle rolling hills define the landscape). 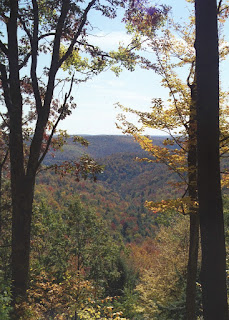 Coming from either environment, most don’t think of WNY as having stark, steep, wooded hills that many would call mountainous. There actually is a stretch of such mountains to the southwest of Wellsville in Allegany County. There are sections of the towns of Alma and Bolivar that feature the highest land in New York State outside of the Adirondack and Catskill Mountains.

The ultimate local summit is Alma Hill, which comes in at 2,548 feet. To put that in perspective, many of you have vacationed in the Old Forge area of the Adirondacks and have scaled the super-popular Bald Mountain (sometimes called Rondaxe Mountain). Bald Mountain would need another 235 feet to reach Alma Hill’s heights.

Seeing the hills and experiencing their beautiful forests and awesome views with a car is fun. As a matter of fact, at 2,500 feet, Alma Hill Road is the highest free paved road in New York outside of the Catskills (the road to Whiteface Mountain near Lake Placid is a toll road).

It’s even better to experience these local mountains on foot. All of them, though, are within private land, so you don’t have that sort of access….that is, until one Sunday every October.

In 1993, a small army of volunteers under the guidance of Rich Shear – who owned Hamilton’s Shoe Store in Wellsville – created Ridgewalk as a way to get people outdoors during our beautiful fall color peak and to support non-profit endeavors in the process. Rich secured access to the mountains’ trails for the event and he found landowners more than willing to share their wilderness for the day.

In 2014, Wellsville’s Jones Memorial Hospital took control of Ridgewalk with all proceeds going to wellness endeavors throughout Jones’ network. 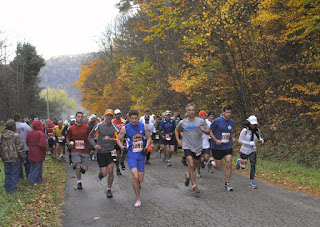 Every year, more than 1,000 people take part in the activity and there’s something for everyone. The walking portion of the event is available in 2, 6, 9, and 15 mile increments. The running portion has events of 5k, 10k, and 25k.

In both cases, the shorter jaunts are more user friendly for those wanting a leisurely experience – you are closer to the summit of Alma Hill, the trails are flatter, and there are some paved sections.

The longer walks and runs are a real adventure. You will go through what is unquestionably some of the wildest territory in Western New York, truly off the beaten path and chock full of colorful trees and wild animals (you could even see a bear, bobcat or fisher). You will assail some incredibly steep hills and see a total elevation change nearing 600 feet. If you are hiking, bring a camera. If you are running, bring your “A” game (serious runners should know the event is sanctioned by USATF, so you can pick up some points).

This year’s Ridgewalk – the 26th annual event -- is on Sunday, October 21st. Registration is open now and it is $10 for kids, $25 for adults, and $20 for those 56 and older. Those fees rise $5 each after September 21st. You can download a registration form and learn more about the event at www.Ridgewalk.com.

As one of the landowners who opens their land on the remote Stoney Lonesome Hollow Road (I know I’m biased, but I think it’s one of the neatest roads on this end of the state), I can attest to how taxing the hills can be – and how incredibly beautiful they are. There’s nothing like it in Western New York…so wild, so colorful, so rugged.

Just once give Ridgewalk a try. I guarantee that if you do, you’ll be back the next year.