EXPLORING THE NIAGARA FRONTIER: Look for Comet 21P this week 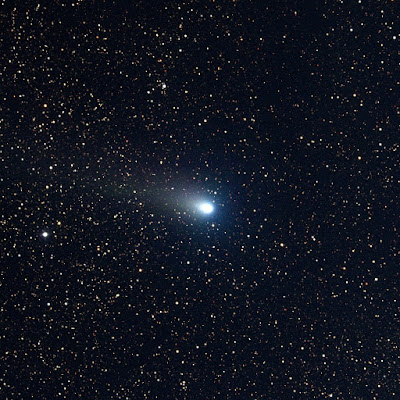 Even so, comets that are accessible to the Average Joe -- outfitted only with his eyes or a pair of binoculars -- still remain rare and fleeting.

We are lucky enough to have such a comet in our midst this week. Comet 21P/Giacobini-Zinner (let’s call it “21P”) is making its closest approach to Earth in 72 years. But fear not, it’s not in a collision course with us: It’s still 58 million kilometers away.

21P was first discovered by Michel Giacobini, a French astronomer in 1900. 21P was the target of the International Cometary Explorer spacecraft, which passed through its plasma tail 33 years ago this week.

21P isn’t visible to the naked eye, so, like Giacobini did, you’ll need some help. Don’t fret. With even a simple pair of binoculars you will be able to see the comet in Western New York’s skies. The best time to look is between midnight and 4:00 AM. Look towards the east and you’ll find the comet near the constellation Auriga, “the charioteer”. The comet will appear as a bright green fuzz ball and as of yesterday was at a magnitude of 6.5, just below naked eye visibility.

Be sure to catch a glimpse of the comet no later than the end of this weekend, before it quickly disappears from the view of field glasses.

Take advantage of this celestial visitor. We “backyard astronomers” don’t often get a chance to see comets, so savor it.