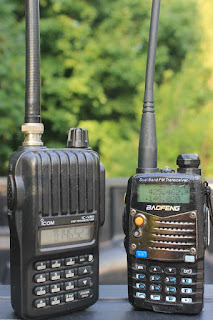 Electronic paraphernalia have become an integral part of the outdoor experience for many folks this century.

Now, most outdoorsmen and outdoorswomen feel naked and afraid without their beloved devices.

Hardcore hikers need their GPS systems (which have become the modern compass) while outdoors enthusiasts of any type lug around their smartphone (which now serves as topographic map, camera, field guide, journal and more).

I traipse around field and forest with neither of those items. But, I always have a ham radio clipped to my belt when I’m in the outdoors.

You might want to do the same as we’ll discuss…

Amateur radio – or ham radio -- is a licensed radio service for well, amateurs. It’s not a professional service through which you’d broadcast radio or news.

Instead, it is a two-pronged pursuit: hobby and public service.

For hobbyists, it gives people of all ages the chance to learn about, work with, and develop radio technology that will allow them to communicate (by voice, Morse code, or computer) with fellow ham radio operators around the corner or around the world.

From a public service standpoint, amateur radio operators provide communications when storms and other natural disasters wipe out phone networks, cable, and electricity. They also provide support for large-scale activities, such as the Ride for Roswell for example.

The name “ham radio” was gradually adopted as amateur radio’s common name back in the 1920s. No one is really sure of where that name came from, but many believe that it came about as a pejorative term used by professional landline telegraph operators when radio first came to be and they viewed radio operators as unskilled.

For the uninitiated, ham radio might be compared to CB radio. Ham radio is sort of like CB…only better.

Remember the citizens band radio craze of the 1970s and 1980s when a majority of cars and many homes had a CB in them and people developed “handles” (radio names) and CB-related songs like “Convoy” filled the FM airwaves? It was fun to talk to people from all walks of life in your town or half-way around the world.

But, CB was and still is a free-for-all. Without a licensing policy, CB devolved to the lowest common denominator, as anonymity allowed people to swear, cause trouble and jam frequencies.

Ham radio is different. All amateur radio operators need to get a license and a call sign from the federal government (mine is KC2ZZW). Horrible decorum is frowned upon and fined heavily. Their equipment is far superior, as they can work multiple bands and channels (CB has only its 40 channels in the 11-meter band) in multiple modes with a variety of equipment. There’s something for everyone in ham radio.

You might be familiar with its presence in pop culture.

The movie “Frequency” starring Jim Caviezel and Dennis Quaid had a plot based on a geomagnetic storm that allowed a ham radio operator to talk to his deceased father decades earlier, which then allowed them to change the course of history.

Tim Allen’s character on “Last Man Standing” is an amateur radio enthusiast and his hobby has played a part in quite a few episodes of the show.

A connection to the civilized world

People have grown so accustomed to having cell phone reception almost anywhere in the civilized world that when they venture from mankind into the wilds they feel incredibly nervous in the event they needed a lifeline.

Here in Western New York, there are vast stretches of southern Allegany and Cattaraugus Counties that have little to no cell coverage. That silence can create anxiety for those frequenting their Southern Tier hunting camps or camping at Allegany State Park. Similarly, most of the Adirondack Park on the other side of the state does not have cell coverage.

Ham radio can give those folks the connections they need in the event of an emergency.

A simple VHF two-way radio (like the one I carry) could, in the Southern Tier, easily connect to repeaters which bring in VHF signals and rebroadcast them to larger audiences, allowing low-power radios to be heard dozens of miles away.

Powerful repeaters like those on Alma Hill in NY or in Coudersport, PA or Smethport, PA can allow hikers, hunters, and canoeists to communicate with those who could send help their direction.

Likewise, in the Adirondacks, the repeater in Old Forge can provide great coverage from Otter Lake to Raquette Lake to Big Moose.

Also, under the Wilderness Protocol, hams are encouraged to listen to the national simplex (non-repeater) calling frequency to be aware of anyone in trouble in the forest or on the water.

These two-way radios are relatively inexpensive. There are two versions that I use.

Chinese-made Baofeng radios like the model UV-5RA come in at under $40 and they are easy to program with a computer, and their accessories (like extra battery packs and antennas) can be had for cheap online.

Then there’s always the beefier and more powerful Icom IC-V80 (around $90 retail) that uses AA batteries, so you don’t have to worry about charging battery packs in the middle of nowhere. That one can be easily programmed through the radio (no computer needed) which might give you more confidence when using it.

You can also put a mobile VHF radio with decent power in your vehicle. So, if you are travelling to and camping in places really off the beaten path like, say, the 100-square-mile Moose River Plains Wild Forest in the Adirondacks, you can radio for help if you get a flat or someone gets hurt or lost.

We can’t overlook the hobby aspects of ham radio when out in the wilderness.

Many ham radio operators like to for lack of a better word, collect mountains and islands. That is, they like to log their conversations with folks stationed at those locales and accumulate as many contacts as possible with far-flung places.

By taking a VHF radio with you on a mountaintop hike, you can reach hams many miles away without a repeater, just using line-of-sight communications.

Or, if you are a kayaker or canoeist you can “activate” an island by transmitting from it and talking to people in the area or around the world. Some island activations become special events with their own QSL cards (which verify a contact and feature a photo of the location) and the intrepid souls create pile-ups of interested hams just waiting to talk to them.

Talking around the world while in the wilds

A lot of ham radio users invest in small, low power HF radios (around $600 new) and develop portable antennas which allows them to set-up a full-fledged station in the wilds that operates on lower frequencies which use the ionosphere to bounce radio waves and, in turn, make contacts around the world. They might do this from one of the aforementioned islands or peaks, or they might do so from their campsite. Their fellow hams love to talk to people out in the field and there is even an annual Field Day during which radio hobbyists set-up such stations and try to work as many of those as possible on the air.

Getting a radio license is easy. You need only study for and pass a test provided by accredited ham radio operators. Studying is a breeze – the American Radio Relay League provides study manuals for around $20 that look at the various subjects and even provide the entire pool of questions and answers that the FCC uses in its testing.

The first level of ham radio is the Technician Class, which grants you permission to transmit voice on VHF and UHF frequencies as well as the ten-meter HF band. The Technician license is very easy to earn – radio theory is limited, and most of the test is about laws, commons sense issues, and operating procedures. Most anyone with a little studying can earn it.

The next levels (like General Class) are much more difficult and require a thorough understanding of radio theory, including some basic engineering principles. But, once you get the Technician license and spend a couple of years on the air, the content of the General exam will become old hat.

But, many people are content with the Technician license. It will allow you to use the aforementioned VHF handheld radios and do some around-the-world HF work on ten-meters.

If you want to get licensed, numerous amateur radio clubs give tests. The schedule for these tests can be found on the ARRL’s website at http://www.arrl.org/exam_sessions/search

Give ham radio a try. It will nicely compliment your explorations of New York’s wilderness areas and you might find a hobby that will also enjoy from the comfort of your home.