EXPLORING THE NIAGARA FRONTIER: Trilliums under attack in WNY

For generations of rural Western New Yorkers the white trillium was one of the most recognizable wildflowers of the spring woods. The brilliant plants would stand a foot tall and boast 3 magnificent bridal-white petals atop 3 large leaves (hence “tri”-llium). It was commonly found throughout forests and woodlots with rich or moist soils.

I write in past tense because those days are long gone.

Younger WNYers – like Millennials– rarely have the chance to see them now and there’s a very good chance that the next generation will never get a chance to experience this wonderful plant. 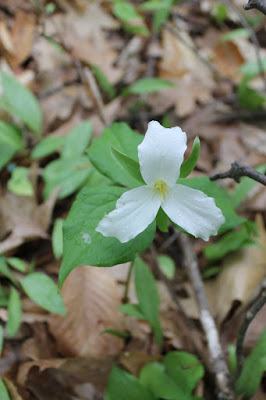 Trilliums are under attack.

Nature is killing off the trillium at unprecedented rates.

When I was a wee youngster traipsing through our Gasport woods over 35 years ago, the trilliums were incredibly abundant and put on quite a show. Every spring during my childhood and early teen years, like clockwork, the forest floor in one woodlot would be blanketed by nearly 2 acres of the showy flower.

Fast forward to 2017 and you would never know that happened. Now, that section is devoid of trilliums and they are an uncommon find in the rest of the woods. Where once stood hundreds now stands the periodic lone sentinel.

It’s not coincidental that the whitetail deer population has exploded in this neck of the woods. Going back those same 30 years, I remember deer always being an uncommon sight on the farm. Now, there are so many that you don’t even look twice when they appear out of the brush. It’s not uncommon to see multiple herds of 20 to 40 deer here in the winter months.

Although plentiful farm crops are available seasonally, the deer have to eat for the other 7 months out of the year. So, they take to the forests and overgraze the understory, eating every plant in sight. They find the trilliums to be especially attractive as compared to other plants, because the leaves and flowers are equally tender and nutritious.

When they dine on trilliums they kill them. Many plants can survive browsing, coming to bloom the next year thanks to healthy bulbs. The trillium, though, has a weaker, shallower-running rootstalk, which needs the leaves to make as much energy as possible and bring life. If those leaves can’t take advantage of their short window of existence (3 weeks of photosynthesis), the plant dies. And, by eating the succulent flowers, the deer takes away the trillium’s ability to reproduce.

The deer kill trilliums at an amazing pace. A 1998 study that was printed in a 2001 edition of the Journal of the Torrey Botanical Society found that deer ate 26 percent of the trilliums in a measured lot. Imagine such destruction continuing on an annual basis!

This overbrowsing has wiped vast out stands of trilliums, just like ours, across the northeast. It is a major fear of we amateur naturalists and the professionals (the likes of the New York State Department of Environmental Conservation) that deer are forever altering the forests, killing not only trilliums, but countless other wildflowers. It is believed that wild ginseng (another plant beloved by deer) will become extinct in the northeast by time this century closes, solely because of deer and not by ginseng profiteers.

The DEC has obsessed a great deal about overgrazing by whitetail deer and officials within the organization believe that were deer to be fully removed from WNY forests most woodlands wouldn’t be able to return to their natural pre-deer- boom state, even after 20 years of regrowth. Many of our wildflowers are never coming back.

So, appreciate trilliums while you can. One day, and likely – and sadly – soon, you will see the last one that you ever will.

The DEC currently lists the white trillium as “exploitably vulnerable”, meaning it is attractive enough to be picked or transplanted and people will do that and kill it. I guarantee, though, that within the next 10 years, the plant’s status will be downgraded to “threatened”, maybe even “endangered”.

It’s that dicey of a situation we are dealing with. We have a deer problem. And, it’s a big one.