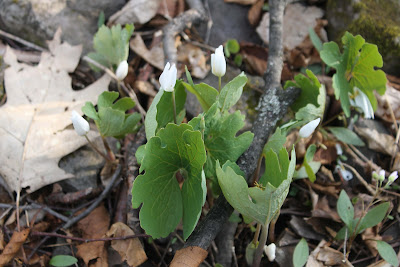 Bloodroot is one of the harbingers of spring on the Niagara Frontier -- and it is certainly one of our most interesting vernal wildflowers.

From mid-April to early-May this member of the poppy family adds beauty to the barren woodlands as it opens for the sun each day, its fragile white petals spreading in the morning, exposing a golden yellow center.

At night, those same flowers close shut. Quite a few species of flowers do that (especially in the summer), but the bloodroot is unusual for the fact that its leaf closes, too. The single, scalloped leaf, told by its large lobes, wraps around the flower stalk. 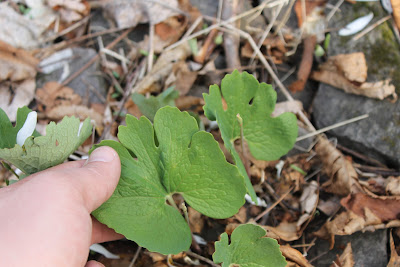 This plant is called bloodroot because it’s deep, large underground stem bleeds when cut. While it might appear brown and potatoey on the outside, an orange or red sap flows through it. That juice had many purposes for the Native Americans.

Indigenous peoples used a diluted version of the plant blood as war paint and as a marking during special ceremonies. It would stick to the skin or mud applicant for days and its latex-like properties could handle sweat without coming off which allowed for its use during long battles.

That sort of permanency also allowed for its use to paint baskets and dye clothing. Even early French settlers to North America used the root to dye wool.

The plant also had some medical purposes – when taken sparingly.

Being a member of the poppy family, it has some of the properties of opium. It contains the compound protopine, which when consumed in small amounts can cause nausea. When taken in large amounts, it’s a poison, as it will slow down the heart and kill the user.

Native Americans found a way to temper that and put the plant to good use – or more appropriately good uses; bloodroot provided a veritable laundry list of benefits.

It stimulates mucus production so it was used as a natural cough drop and it treated bronchitis and other respiratory ailments.

In amounts that weren’t diluted like the war paints were, it served as an aggressive destroyer of flesh, so it was used to remove ringworm, warts, polyps, skin cancers, and bodily fungi.

Although its roots create strong interest, especially for any outdoorsperson interested in seeing them bleed, it is strongly encouraged that you leave the plants alone. Once you dig up the root the plant is dead.

Because of that, the state considers it a plant susceptible to exploitation – and it certainly is: I know of very few bloodroots in Western New York and those that I do are in very public areas (Royalton Ravine Park and Lockport Nature Trail). Their numbers have decreased in both places, no doubt due to being dug up by curious hikers.

So, please, let these interesting plants be. Let their beauty – and their stories – reappear every spring.