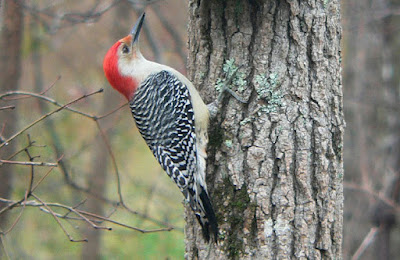 If you have a suet feeder in your backyard it’s no doubt visited by our most common woodpecker, the cute little downy woodpecker. You might occasionally see a much larger, much gaudier woodpecker with a red crown, a plain grayish belly, and a zebra-like black and white back.

That bird is the red-bellied woodpecker.

But, wait, you say there was no red belly?

There isn’t…at least to almost all observers.

You wouldn’t see the reddish feathers unless you were holding the bird in hand and you brushed back some of its feathers in the lower abdomen, ‘round about where it does its business.

Despite its very misleading name, the poorly-labeled bird is something to appreciate.

Fifty or 60 years ago you might not have had that chance on the Niagara Frontier.

Red-bellied woodpeckers were a bird of the southeast. We’re at the northern edge of its range, and sightings of the bird in Western New York were rare right through the early 1960s. But, they spread northward -- at a very dramatic rate -- around then, choosing not just to breed here during our too brief summers, but also to stay all year as well, even through the toughest of winters.

That’s an outcome of two things.

First, you can thank those who, like you, feed birds. The explosive growth in birding led to a significant increase in the number of suet feeders, the fatty goodness of which sustains this inset eaters through the sometimes lean winter months. You’ve given them nourishment and a reason to stay.

Secondly, the closure of small family farms and the return of the land to woodlots and forests gave the woodpeckers the vast habitats they had been lacking.

And, they are having a heyday now in those same forests. They feast on wood-boring beetles, meaning all those dying ash trees you see throughout the area are serving up a smorgasbord for these birds.

Red-bellies will also eat ants and grasshoppers, but they don’t stop at meat. They are omnivores and will consume acorns, beechnuts, and berries in volume. It’s the only woodpecker in the area that will actually store food to eat at a later date, placing the nuts in a cache.

Call them what you will, they are undeniably “handsome” -- they add a lot of color and zest to the otherwise plain winter landscape.

Red-bellies deserve your care and attention with a suet feeder. If you get them to stay in your yard or woodlot they can return the favor in the summer months by eating the pests that might be eating your trees.

That’s a pretty darn good mutually-beneficial relationship to have with a feathered friend.