EXPLORING THE NIAGARA FRONTIER: The brown snake -- a snake for all seasons and all places 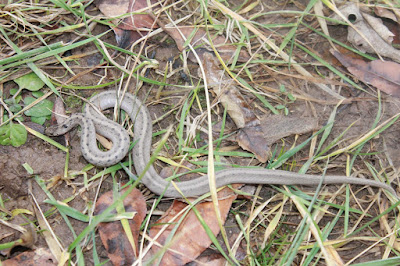 You might be thinking to yourself “here it is, the dead of winter, and Confer’s writing about snakes?”

I am, because you never know when these limbless reptiles will make themselves known, especially when it’s a brown snake.

Brown snakes, formerly known as DeKay’s snake (the name that I still use for them), are more tolerant of colder temperatures than are other snakes and could make themselves known, even in the winter. If we get a couple of warm days don’t be surprised to see one come out of hibernation. The snake in the accompanying photo made an appearance a few days after Christmas when we enjoyed that one 50-degree day that had us – and the snake -- pining for spring.

Brown snakes hibernate under dead trees and in dens, which in many places of Western New York where rocky outcrops are few means they are sleeping in old woodchuck tunnels and similar mammalian homes. It doesn’t take much of a flow of warm air in those airy tunnels or under a log to wake them up.

These snakes are the second-most common serpent on the Niagara Frontier, just behind the ubiquitous garter snake. You wouldn’t know that, though, because they are rarely seen.

That’s because DeKay’s snakes spend most of their life hidden. Rather than moving about in the open in search of mice, frogs, and other critters consumed by larger snakes, they live under things – leaves, dead bark, logs, rocks, and mulch. They spend their time in those environments feasting exclusively on soft-bodied invertebrates like slugs, earthworms, and caterpillars. Because of that preference for dark places and some of their prey like nightcrawlers coming out after the sun sets, brown snakes are quite often active at night, whereas most snakes, being the cold-blooded creatures that they are, prefer the daytime and the heat generated by a brilliant sunny day. This comfort in colder temps also contributes to their desire to venture about in the winter.

With a diet lacking in the fatty goodness of mammals brown snakes don’t get very large. They are 6 to 13 inches long and skinny, with most specimens I’ve seen coming in around 10 inches.

These snakes are, like their name implies, brown in color. Their primary coloring is a light brown or tan, and they have two tell-tale rows of dark brown spots along their back.

Despite that, and despite their small size and lack of venom, browns still scare some people. Especially city people. This snake might be the most widespread in New York because it’s not just a snake of the wilds – it’s a city snake, too. Brown snakes are rather abundant in suburbs and big cities, living not only in lawns and parks, but also under buildings, in trash and debris, and around dumpsters. Their desire to hide under almost anything and eat squishy animals makes them fit to live virtually anywhere.

Brown snakes are also special for the fact that they give birth to live young. 70 percent of the world’s snake species are oviparous, meaning they lay eggs. The browns are viviparous and can live birth anywhere from 4 to as many as 40 baby snakes at a time. This is done by browns and some other local snakes, like garters, because in northern climates laying eggs isn’t the always the best option because the earth can’t consistently keep the eggs warm enough for growth (turtles succeed where northern egg-laying snakes fail because they can dig deep pits in which to bury their eggs).

The DeKay’s snake, like all snakes, is an interesting creature. Maybe you’ll get to see one this year. Maybe it will be in the winter or in the big city – brown snakes truly are snakes for all seasons and all places.