EXPLORING THE NIAGARA FRONTIER: The invasion of the nuthatches 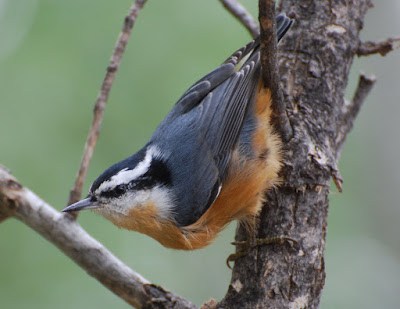 If I was asked to make a short list of my favorite birds the red-breasted nuthatch would be on it. Not only are the birds cute and friendly, but their songs transport my thoughts and memories to vacations and weekends on their home turf, be it the seemingly endless coniferous forests of northern Canada or the tracts of hemlocks, pines, and spruces found in certain locales of Allegany County.

You see, this nuthatch, unlike its very common and very familiar cousin the white-breasted nuthatch, is not especially common on the Niagara Frontier, especially where I live on the lake plains. Red-breasted nuthatches have an affinity for cone-bearing in great numbers. Those are forests of the north, or, here in Western New York, atop some of the higher peaks near the Pennsylvania border or in the woodlands that were planted by the Civilian Conservation Corps during the Great Depression.

These birds might occasionally be found nesting throughout the region, perhaps making home in a mixed forest where there a few larger spruce mixed with deciduous trees. But, for the most part, they are a hard find until winter when migrants visit our feeders. Even then, their numbers are light.

This winter is already shaping up to be different… a lot different.

Occasionally, various species of birds from Canada that would otherwise stay there make their way to the States to stay the late-fall and winter due to food shortages or horrid weather back home. This is called an irruption.

Well, this is an irruption year for sure for these little mites.

A few weeks ago, well ahead of schedule, they started appearing in every nook and cranny of Western New York. I have two that frequent my feeders in rural Gasport. My parents have some. I’ve heard them every Sunday morning within the actual hamlet of Gasport itself. One of my Twitter friends has them at her feeders – in the heart of urban Buffalo.

Take the time to admire these birds. As mentioned earlier, they’re cute. They are a fifth to a third smaller and much sleeker than white-breasted nuthatches and a lot more attractive, which is saying a lot because white-breasted nuthatches are pretty birds to begin with. Red-breasts are 4 ½” long, sporting a blue-grey back, a black cap, a black line through their eye, and many are brushed with a chestnut or red on their grey-white breasts.

Coming out of their beaks is a tinny, nasal call, that is itself cute -- it sounds like a small toy horn.

Their feeding style in unique. Like other nuthatches and quite unlike woodpeckers and flickers they climb trees downward rather than upward. You have to admire their upside down climbing technique. They do this while looking for insects or cramming seeds under pieces of loose bark or in crevices which they then use as leverage so they can pry them open – which is where their name came from (nuthack in olde English).

What forced them from Canada’s boreal forests and brought them here? It was one of two things.

One, there could have been a shortage of seeds all year, so they ran out early.

Two, there were actually so many pine and spruce cones early in the season that the red-breasted nuthatch parents overproduced offspring in response to the bounty and the nourishment they were given and the grown “baby boomers” ate all of them out of house and home to the point of running out.

The second option seems the most plausible this year, because Canada’s drier weather was conducive to nuthatch-friendly crop that allowed cone seeds to become easier to crack open. Also, I have seen irruption reports all across the northern United States, meaning that the nuthatch population was very large, Canada-wide.

For whatever reason, they’re here. And, it’s something to celebrate and see up close. If you have some in your yard, go out to your feeding station. They will let you walk right up to them and, with a little patience, they will even eat out of your hand. Most other bird species won’t oblige, but these ones do, maybe because they are like all Canadians --- friendly.