EXPLORING THE NIAGARA FRONTIER: Those aren’t ticks in your home – they’re pseudoscorpions

With all the press that has been cast upon ticks, especially with Western New York being a hotbed for those that carry Lyme disease, many people have been diligent about checking their bodies and clothes for the little parasites after having spent time outdoors. 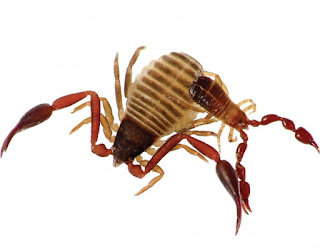 Many of those souls have been surprised to find what they believe are ticks in their home which leads to all sorts of fear and paranoia – “If I brought these ticks into my home on my clothes, they could be anywhere!”

Before getting too frightened and then heading off to the doctor for unnecessary bloodwork to test for Lyme, give the little critter a closer look.

The little tick-like arachnids in your home might not be ticks, they are more than likely pseudoscorpoins.

Like the name implies, they aren’t scorpions, but rather fake scorpions. If you looked at them closely you’ll notice that at the end of their very long front legs (even longer than the front legs of ticks) are tell-tale club-like pincers, much like those sported by true scorpions.

Pseudoscorpions lack the tail and stinger that scorpions have and their bodies are very small, averaging about 3 millimeters in length, and roundish, which accounts for the confusion with ticks. It’s any easy mistake for anyone to make – one could say that if a tick and a scorpion had a baby it would look like a pseudoscorpion.

They are relatively common, living in approximately one of every five homes. These long-lived mini-monsters, which can thrive up to 3 years, tend to go overlooked due to their small size and their preferred hiding area: Around old books.

Booklice and dust mites frequent old books because they feast on the starch-based glues that was used to bind them. The pseudoscorpions eat those small critters, catching them in their oversized claws then secreting a digestive fluid into them which allows the scorpion to suck their insides out.

Pseudoscorpions are also frequently found in sinks and bathtubs, which leads many people to believe that when they took a shower a tick fell off of them. They show up there because, once again, that’s where they feed. The humidity around showers attracts small invertebrates that feast on mildew, creatures so small you almost never see them – that’s what the pseudoscorpions feast on.

The “book scorpions” can be found almost anywhere in your home, even a long distance away from books and bath because they are frequent fliers. They don’t have wings, but they’ll occasionally latch on to a house fly to either try to eat the much bigger creature or to consume the even smaller animals hiding in the fly’s hairs. This form of mass transit allows them to spread their range with ease.

Pseudoscorpions not only look weird, but they have a weird mating behavior. The male will prepare an area of a flat surface, putting effort into making it free of fuzz and dirt. He then dumps his sperm onto that surface and encourages the female to walk over it and in turn pick up the sperm. To make her do that, he displays his pincers as a show of strength then he proceeds to dance to coerce her into joining him. This rather unusual and elaborate behavior makes the mating ritual sometimes go on for almost an hour.

Despite their tick-like appearance, nasty looking claws, and strange sexual behaviors, pseudoscorpions pose no threat to humans. Many entomologists and extension offices encourage you to not kill them and let them live in your home because they are doing you a favor and killing pests that might be eating your books and giving you allergies.

So, the next time you think you’ve found a tick in your house, don’t fear for your life. Give it a closer look – it’s probably a pseudoscorpion that you’ve been sharing your home with.