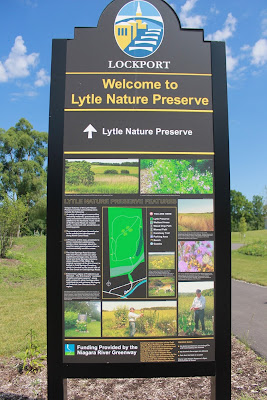 The town of Lockport is blessed with some exceptional trails. The most recent addition to that embarrassment of riches – the Lytle Nature Preserve – is far and away the least utilized.

Maybe it’s because it’s literally sandwiched between the town’s two most popular trails, the Erie Canal towpath (a.k.a “the Canalway Trail”) and the Lockport Nature Trail.


Or, maybe it’s because it’s relatively new and, in turn, relatively unknown.

Let’s hope this column takes the trail into the known and people enjoy a jaunt on this splendid trail.

The history of the Preserve

The 111-acre site was donated to the town in 2008 by William and Celeste Lytle. William, a retired lumberman who owned Ridegwood Lumber, had purchased the property with the intent of raising beef cattle. After scrapping that idea, the Lytles had the vision of giving the land to the town under a conservation easement through the Western New York Land Conservancy, ensuring public access to grasslands, wetlands, and forest that offer prime habitat to a variety of plants and animals.

It took a few years to go from raw land to a navigable experience for the masses.

In 2010, the town applied for Niagara Greenway funding, which it received in 2011, to make the Preserve accessible to the neighboring Canalway trail. The reasoning was that the Canalway trail had no access to natural lands despite bordering dozens of miles of prime forest and field. This would connect it to nature.

The $95,000 in Greenway money was invested in the expansion of the Canalway’s parking lot (which doubles as the Lytle Preserve’s parking), the creation of paved access and the construction of a boardwalk. Development of those various niceties began in late-2012 and continued into 2016 through efforts of Lockport highway crews and volunteers.

The Lytle Nature Preserve is easy to get to. 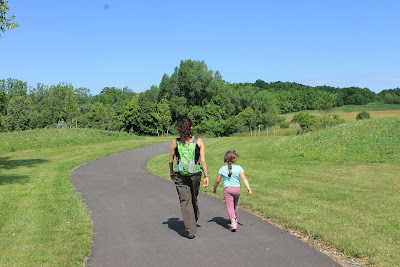 If you are coming from out of town, take Route 78 north through the city of Lockport. After going through Lockport’s Lowertown section, you will pass the very popular hamburger stand, Reid’s. After doing so, you will come upon a lighted intersection (with a Crosby’s gas station at the corner). Turn right onto Old Niagara Road.

Approximately a quarter mile down that road, take your second left, which will be North Canal Road. Then, within a couple hundred feet, turn right onto on access road that will take you to a nice parking lot next to the Canal. This twenty-car lot is where most Canalway Trail hikers start and where you will start your hike into the Preserve.

To do so, walk back down that access road you just drove in and cross the street where you will see some nice signage welcoming you to the Preserve.

From blacktop to boardwalk

The first quarter mile of your hike is a rather fancy way to start a nature hike.

Upon passing the welcome sign you will walk down a nicely blacktopped trail towards a small wetland of approximately 8 acres in size. 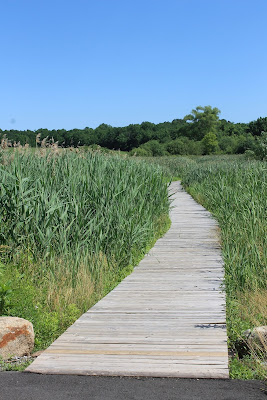 Once there, a perfectly-built boardwalk will keep you above that swampy ground. The wetland won’t give you a view of a pond or marsh. Instead, it is an almost jungle-like mass of reeds that you’ll be passing through.

That doesn’t mean you won’t have a chance to see some critters. On our recent hike, the reeds were full of red-winged blackbirds and swamp and song sparrows.

Once getting through the marsh, the path remains flat, is covered in nicely groomed gravel, and is well-maintained. Ken Horvath is a part-time town employee and volunteer who handles the brunt of the trail maintenance and he keeps the grass along this portion of the trail cut short so hikers and joggers need not worry about ticks. 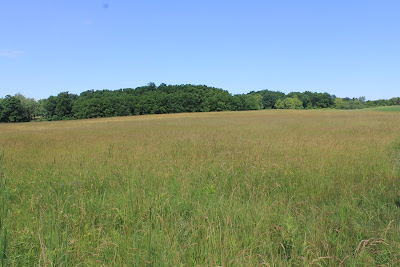 Upon entering this section, your views open up to impressive grasslands of perhaps 60 acres to 75 in size.

Native wild grasses had been planted in these grasslands (which are harvested in alternation by the way), affording an excellent home to field sparrows, northern harriers (marsh hawks), bluebirds and the always interesting bobolink, an uncommon member of the blackbird family that has a strange bubbling call and sports colors in reverse to that of most birds (a white back and a black breast).

When hiking, take a breather and listen for that wonderful bird and keep your eyes peeled for other creatures. We saw some evidence of coyotes in this section (the tell-tale hair-filled scat), so bring your binoculars. It wouldn’t be unexpected if winter hikers would see snowy owls here.

The blacktop-boardwalk-stone section is perfect for walkers and joggers of any age and skill level. It is so flat and so well maintained that young parents can push a stroller through there with no problem. On our hike there we even saw some bicyclists from the Canalway trail using that stretch.

Those trail conditions change once you get into the woods. The lengthy loop of trails in the forest are soft and muddy in a few spots, but for the most part they are in very good shape. Those wet areas don’t allow the weed cutting machines to get in there often, so you will encounter some stretches in the lower areas with weeds that are shin to knee high. I was really surprised they weren’t trampled by visitors, which, I guess, speaks to the low number of hikers using the full length of the trail.

To me, the wooded portion is a normal hiking trail. But, those who prefer the civilized Canalway trail or were spoiled by the first couple of sections might be turned off by the wildness, especially if they are wearing shorts.

Press on. Horvath and others have done a bang-up job in putting a trail system in place in the forest.

When you come to the entrance of the woods, don’t be put off by the “Posted. No Hunting” sign. You’re not entering private property. That’s just the town’s way of telling hunters they can’t pursue game in the Preserve.

The first portion of the wooded hike is in some lowlands of young-growth trees dominated by ashes (which might cause it to look like a skeletonized ghost town in a few years as the emerald ash borers take up residence). In this section we encountered song sparrows, yellow warblers, catbirds, cardinals, and orioles.

The second portion is on some slightly higher and much-drier terrain with some older trees with more diversity. Here, we saw deer, woodpeckers of various species, jays, and wood thrushes. Any place you can hear the flute-like calls of the thrush is a good place – they are a bird is serious decline all across the country.

As you get into the higher section, you will encounter very little undergrowth because of the sun-blocking canopy of the larger trees. So, to help you navigate the trail, there are orange ribbons tied to many trees.

This is a loop trail in the woods, so it will take you back to where you entered, unless you choose to exit in two other locations which will allow you to walk at the edge of the grasslands along the forest.

I suggest you stay on the trails, especially when you exit the forest. Don’t explore the high grasses. When traipsing through grasslands it is too easy to step on songbird nests and ruin the environment. There are more than enough trails to keep you engaged with the wildlife.

The entire hike across the Lytle Preserve from start to finish took us 50 minutes as we took it at a leisurely nature-watching pace with our 5 year-old daughter leading the way and my 3-month-old strapped to my chest – this was his first nature hike.

Visiting the Lytle Nature Preserve offers a nice respite from city life (the city of Lockport is literally just around the corner) and it gives canal walkers a change of pace from the sterile sameness of the canal towpath.

Let’s hope that more people start to use this wonderful trail and experience the wildness that the Lytles so wisely thought that the whole world deserved. This is a gem truly worth exploring on the Niagara Frontier.