EXPLORING THE NIAGARA FRONTIER: May apples – the cancer-fighting forbidden fruit

In the book of Genesis, Adam and Eve ate of the forbidden fruit and destined all of mankind to some pretty miserable aspects of existence.

No one knows exactly what the forbidden fruit was, but the image that most people have in their head is that of an apple.

There’s a plant in Western New York that goes by the name of apple – specifically the May apple – but it’s not an apple. I would, though, consider it a forbidden fruit. 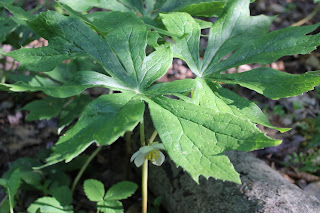 The May apple is a fairly common springtime wildflower that can be found in forests, woodlots and hedgerows found all across the Niagara Frontier, from the lake plains all the way to the highest peaks of the Allegheny Plateau.

May apples can form fair-sized colonies on the forest floor; it’s not uncommon to see a dozen to a few dozen plants in one area. They can be readily identified by their tell-tale umbrella-like appearance.

The May apple stands a foot to a foot-and- a-half tall. At the top of its split stem are two large leaves that are deeply-lobed, giving it appearance of having multiple leaves when really you are just seeing 5 to 9 lobes. Those two leaves cover a fairly large area, reaching a foot in width together.

Those leaves act as a canopy. Below that canopy is an exquisite single white flower. Those circular flowers are about 2” in width and they bloom in WNY woods in mid-May. That is where the plant gets half of its name.

The other half of the May apple’s name comes from the fruit that begins to appear in the last week of May and becomes fully ripe around the second week of June.

It’s a yellowish fruit, about 2” long that is lemon shaped. Most wilderness survival and edible plant guidebooks count the May apple as being edible. Some folks say that it tastes like strawberry. Others think it has a dull flavor that doesn’t warrant harvest.

Either way, I’ll never know. I don’t want to chance it.

It’s a stretch to consider the May apple to be edible.

The May apple as a whole is an exceptionally poisonous plant and the same can hold true for the fruit.

When unripe, it is poisonous. The unripe apples are green while the ripe ones are yellow. But, with two colors so close to one another (greenish-yellow is the more accurate description of the ripe fruit), what actually constitutes ripe?

Even when you have good timing, you’re still pushing your luck: The seeds within the fruit are toxic as are the fruits when eaten in quantity. What constitutes “quantity”?

I’ll play it safe and hold off on my woodland harvests until the strawberries and blackcaps ripen.

A plant of powerful poisons

The May apple has been spared decimation by whitetail deer, unlike the trilliums we discussed a couple of weeks ago, because the plant is so poisonous.

The leaves, stems and roots are not kind to the digestive system. It will inflame the stomach and intestines to the point of killing whoever eats it.

Native Americans ate May apple as a means to commit suicide -- although it was anything but a quick and painless death.

Because of the appearance of the plant is close to the Middle Eastern Mandrake, an esteemed plant of supposed magical powers, early settlers thought they could use it for magic, too.

They did get some use out if it.

They learned from the indigenous peoples that May apple, in small amounts, could rid the body of intestinal worms and serve as a powerful laxative. Also, its juices could be used to control plantar warts.

Modern science has found real use for May apple.

The plants produce podophyllotoxin, a building block of the cancer drug etoposide. That drug helps treat lung and testicular cancer and lymphoma. In chemotherapy, it has been shown to inhibit the activity of an enzyme essential for the replication of cancer cells, preventing their spread.

In some form or another, May apple has been used as a cancer fighter since the early 1970s. In that decade alone, some more than 130 tons of May apple roots were either grown or harvested in the wild.

In recent years, a more efficient means of extracting the toxin has been employed, ensuring that the plant’s natural stocks won’t be decimated.

The May apple is surely an interesting plant. If you see one while out exploring the Niagara Frontier, marvel at it…don’t eat it. You’re taking a chance if you do, so appreciate its beauty and its value in helping to keep alive your family and friends who are battling cancer.