EXPLORING THE NIAGARA FRONTIER: What’s with the dead birds in your yard?

In what seems to have become a rite of winter throughout Western New York, it’s almost certain that rural residents living within a couple of miles of large dairy farms and airports will, over the next months or so, be subjected to an odd, even frightening, sight – starlings literally falling out of the sky and dying before them. When the carnage concludes, homeowners will find dozens of the birds dead in their lawns. 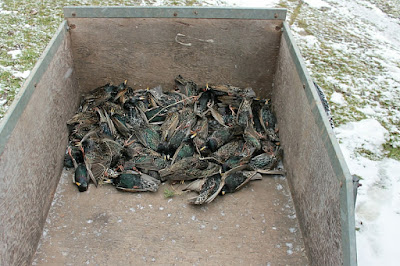 In recent years, this columnist has picked up as few as a dozen and as many as 120 at a time from his yard.

Their deaths were caused by none of the above.

Instead, the birds will have expired due to an application of a chemical agent known as “Starlicide.”

This compound is produced by Purina (which some may find strangely hypocritical given the company’s basis in animal health) and it is the most effective tool -- maybe the only effective tool -- in controlling this most onerous of birds. Upon consuming feed tainted with Starlicide, starlings slowly expire over a 24 to 36 period as their organs congest.

As unsettling of a sight as hundreds of dying and dead birds may be to the average person, it’s a welcome sight to farmers, aviators and nature lovers. They are all affected by this invasive species, brought to our shores in the 1890s when fans of William Shakespeare made the ill-advised decision to release every bird mentioned in his plays to the Americas (the very same reason we are inundated with house sparrows). The starlings multiplied and took over the skies, being just as much at home in the Big City as they are in farm country. It is estimated that there are over 200 million of them in the US. You can’t find an American who is unfamiliar with these black birds that have green and purple iridescent tips on their feathers.

Farmers are certainly familiar with them. The birds congregate in feedlots by the thousands, stealing feed and defecating in animal food which spreads disease, including transmissible gastroenteritis virus which can be deadly to young swine. It is estimated that starlings are responsible for $800 million in agricultural losses every single year. So, with no other options left to contain the birds and prevent the damages, farmers and the USDA regularly poison the birds every winter when they gather in the greatest concentrations (thus making a mass kill easier).

Similar campaigns occur around airports. There, the colonizing birds can prove to be deadly when traveling in large flocks and into the paths of aircraft, getting stuck in their jets or gumming up their propellers. Starlings were the known culprits in the infamous 1960 Boston crash of Flight 375 that killed over 60 people and remains to this day as the single worst bird strike in history. Many more starling events have followed over the years, including a late-1990s crash that killed 34 people in the Netherlands.

Even bird lovers like myself savor the demise of this feathered fiend. Starlings are a scourge upon native species, especially fellow cavity-dwellers. Take our beloved state bird, the bluebird, for example. That beautiful creature was nearly wiped out in New York because of starlings. If not for the efforts of birders and volunteers throughout the Empire State, they would have been; naturalists and outdoorsmen countered the overpopulation of the aggressive starlings by erecting bluebird-specific birdhouses throughout the state. Because of that, the bluebird has become common once again over the course of my life. Eradicate the starlings and we might see similar success stories with other birds like the rarely-seen redheaded woodpecker (of which I’ve only seen 2 in my life because of the starling invasion).

Taking all of that into consideration, and knowing that the poisoned birds are no threat to you, your pets, or predators, you should accept the mass deaths of starlings with open arms; that is, after you’ve taken the time to pick up their corpses. We would be better served by more mass poisonings of them each winter for this simple reason: the only good starling is a dead starling.