EXPLORING THE NIAGARA FRONTIER: What is your “go to” fishing gear?

Heading off to one of our family vacations in the Adirondacks, I -- of course -- had to include fishing gear on the list of necessities.


When it comes to such a trip, I have to pack wisely – the family’s luggage takes up a lot of space in the truck and, on top of that, I really can’t take a massive tackle box out in the kayak with me. Any tackle that’s going on the water has to fit into my life vest.

That really limits what can go. I must focus on lures that I find reliable, no matter the water, no matter the species. In the Adirondacks, just like anywhere in upstate New York, I might find myself targeting trout on one cast and bass or pike the next. I have to be diverse and prepared to catch anything.

This is old hat to me. I’ve been vacationing in the Adirondacks with my wife for a dozen years and I’ve been small boat fishing longer than that. So, I already have my old stand-bys that I stuff into life vest. It just so happens, they are the very same lures that I keep with me no matter where I might fish, be it Alma Pond near the Pennsylvania border or Glenwood Lake in Orleans County.

So, just what is in my life vest?

Here is my “go to” fishing gear: 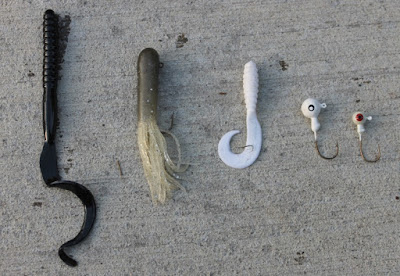 So, that’s it. That’s all you will find in my life vest. My selection might seem simple. Maybe it is. But it works.

And, I should probably tell you that with that gear I always use a two-piece medium action rod with 12 pound test on a spinning reel. That line diameter allows for a nice slow, subtle drop of tube jigs and it gives me the strength I need to horse a bass out of weeds.

This begs the question: What are YOUR “go to” lures and baits?

If you were stuck in the wilderness and had just a handful of lures to stay alive, what would you hope you had with you?