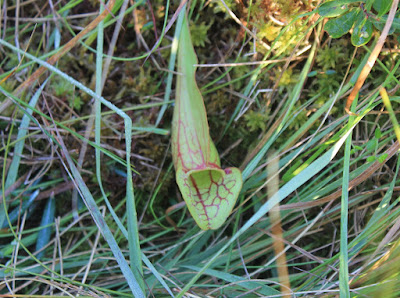 Nearly everyone is familiar with the Venus flytrap, the famed carnivorous plant of the southeast that snaps shut on insects that might end up within its mouth-like leaves.

Many folks don’t know that its equally-carnivorous but much less dramatic cousin, the pitcher plant, can be found in Western New York.

It just so happens that now is a great time to find this rare plant. Its large, brick-red nodding flower is in full bloom in August, alerting you to the pitcher below.

Those bladder-like leaves that give the plant its name are a vessel which collects water, and ultimately, insects on which it feeds.

It’s an evolutionary tool made out of necessity; pitcher plants grow in bogs, mossy acidic wetlands of which we have very few on the Niagara Frontier. Two bogs that immediately come to mind are Hanging Bog and Moss Lake, both being located in Allegany County and both being places we will explore in future installments of this column.

In a bog, decay happens at incredibly slow rates. As an example, some happy archeologists have found human bodies that were essentially mummified in European bogs, well-preserved hundreds of years after their death. Because of that slow rot, there is very little nitrogen available for flowering plants, hence bogs being home to mostly mosses. Flowering plants that do remain need to find nitrogen by alternative methods.

This is where the pitcher plant’s strange-looking anatomy comes into play. Whereas the Venus flytrap appears to be a quick eater, the pitcher plant takes its sweet time through an elaborate process. 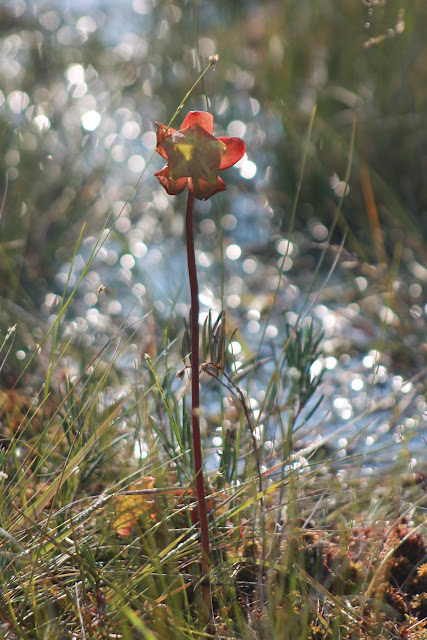 The leathery, green sometimes burgundy leaves, with deep-red veins, which make it look like a bodily organ, have pools of water within them. The stench of that stagnant water and the death within draws flies and other carrion-eating insects into the bladder. The downward facing hairs within the pitcher do not allow the insects to fly or crawl out. Those hairs are said to issue a narcotic, which stuns the insects that then fall into the water. Bacteria in the water break down the drowned insects and the pitcher plant emits an enzyme that converts the insect mush into nitrogen that the plant consumes through the walls of the leaves.

It sounds like a lot of work, and it takes a lot of time, that is if the plant is lucky enough to catch some insects. All of that, in conjunction with the rarity of bogs, makes the pitcher plant one of the least common plants on the Niagara Frontier. It has a precarious diet while living in a precarious habitat.

That has led New York State environmental officials to count the pitcher plant as an exploitably vulnerable native plant, a classification teetering on threatened. So, if you see one, do not pick it, even if you count yourself as a skilled terrarium gardener. Not only is their harvest strictly prohibited on public land, but doing so also compromises the long-term population of one of our more interesting plants.