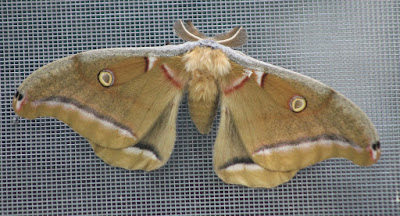 This past Sunday, my family and I awoke to find a gigantic moth on the outside of our kitchen window. It was a polyphemus moth, the largest – and the least common - of the giant silk moths that can be found in Western New York.

While my daughter and I thought its wingspan of a half foot was intriguing, my wife found it unsettling, as it reminded her of a bat. She’s not the first person that I’ve heard share such thoughts and she won’t be the last.

Man is not the only creature frightened by polyphemus moths. Animals that could be considered potential predators like birds and frogs are also put off by the moth’s appearance. That can be attributed to the appearance of eyes on its large wings, which makes attackers think that it’s the face of a much larger animal, like a cat or something.


In the picture that accompanies this article you will notice how it looks in a closed state – there are two small eyes on the wings while the abdomen looks like a nose to complement the face. I did not get a picture of its wings being fully open, but, if I did, you would have seen two gigantic multi-colored eyes on its lower wings. It’s quite the sight and you can imagine why an animal might be frightened by it. And that is where it gets its name – Polyphemus was a one-eyed man-monster from the island of the Cyclops, made famous in Homer’s Odyssey.

Now is the time to watch for polyphemus moths across the Niagara Frontier. They emerge from their cocoons in late-May and early-June. In southern states, you will actually see two broods of moths, one in May and another in August. But, due to our northern climes, we see them just once a year for a small period of time (maybe a two week window).

These beautiful flying insects will be attracted to lights at night, which is why the specimen we saw lit on our window…he was no doubt enamored with the nightlight by that window.

As ugly as they may be to some people, they are even uglier when young. Their caterpillars are nearly hairless, bright green, squat creatures, thicker around than a big man’s thumb. They will reach three and a half inches in length.

They are none too numerous, though, as the adult female lays just 3 to 5 eggs on the underside of a leaf. Coming out of the egg, the caterpillar eats the shell and then proceeds to devour leaves of trees like oaks and maples, their preferred foods. They are voracious – it’s said that polyphemus caterpillars will eat 86,000 times their weight over their life cycle.

In the late-summer, the caterpillar will wrap itself in a large leaf and then spin a huge, hairy cocoon of silk. The light-brown, hair-like oval cocoon is then about half the size of a chicken egg. It’s a sight to see a silk moth hatch from them in the spring, the large beast coming out of the pupal home and stretching out its newfound wings.

If you have a chance to see one of these magnificent insects, don’t be afraid. Leave that to the animals that might otherwise feed on them – it’s a great defense mechanism that ensures we can forever enjoy these giants of the insect world.


Bob Confer is a Gasport resident. His column, Exploring the Niagara Frontier, is published every Thursday on All WNY News.