EXPLORING THE NIAGARA FRONTIER: Help bring back the nighthawks


The common nighthawk is an interesting creature. At just over 9" in length, a little bit smaller than a blue jay, it is a medium-sized bird that can be seen at dawn or dusk, flying at great heights in search of the insects on which it dines. 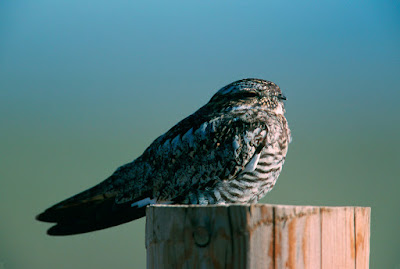 You may have seen nighthawks before and probably remember them quite well: The brown birds can be frightening at first glance as they look almost like giant bats in flight. They are quickly told apart from the flying mammals by the white stripes on their wings and the call of "peent" that escapes their beaks.

Unfortunately, the common nighthawk is quickly becoming anything but common. The NY Department of Environmental Conservation calls it "a species of special concern," an animal the population of which merits attention and consideration. An argument could easily be made that nighthawks deserve to be classified as "threatened"; as they are in imminent danger of becoming endangered in the Empire State.

It wasn’t always like this. Historically, it was a very common bird, nesting on rocky areas so common to New York’s vast shorelines along and in our borders. But, as Man conquered the wilderness they built homes on the nighthawks’ nesting sites and, making matters worse, they brought with them domestic cats which wandered about and/or became feral, in turn feasting on the ground-nesting birds. Nighthawks soon became a rare sight. They saw a resurgence in the early 1900s and actually became quite abundant in urban areas until only recently, adjusting to the growing human population by living atop buildings – skyscrapers, apartments, schools and factories – that had flat, tar and gravel rooftops which provided fine places to nest. The gravel most commonly used was perfect for the birds’ needs and, save hawks and crows, the high rooftops were predator-free.

But, the times have changed and so have roofing technologies. More and more contractors and maintenance personnel are going with rubberized, PVC, or stone ballast roofs that - through no intentional fault of the roofers - have eliminated the gravel so key to the birds. Because of that, nighthawk populations have seen a drastic decline in recent decades. The NYS Breeding Bird Atlas that was compiled in the years 1980 to 1985 noted countless nests throughout the state, especially in urban areas. The most recent version of the Atlas (which uses data amassed from 2000-2005) shows a pitifully small number of nests. The difference between the two studies is quite disturbing.

This trend does not have to mean that they’re a lost cause destined for near-extinction in New York. Commercial property owners and government facility managers can easily help bring back the nighthawks by turning their building into a home for our avian friends. You will need a large flat rooftop, something in size of at least 6,500 square feet as that’s what nighthawks most prefer. Put down some gravel on the roof. Stone ballast won’t cut it; it’s much too large.

Nighthawks need peastone, wee pebbles with a diameter of 3/8 to 1/2 of an inch. The stones should be laid down in a 9-foot by 9-foot patch that is about two stones deep. An area that size will require six to eight sheetrock buckets of peastones.

You could just set that atop the roof but it is strongly suggested by some birders that you build a border around the stones to prevent the gravel from moving around (which also helps in alleviating the fears of Maintenance) and you should first lay down some landscaping fabric to protect the roof. Before commencing with your project you must also be cognizant of other factors like shade, worker traffic and drainage. Among the best resources available for such projects is the Project Nighthawk guidebook available at: http://nhbirdrecords.org/all-articles/Nighthawk-handbook.pdf

By building a nighthawk site at your place of work, whether you’re a businesswoman looking to do something for the environment or a teacher wanting to educate his pupils about the world around us, you can easily have an impact on one of nature’s creatures that so desperately needs our help.