EXPLORING THE NIAGARA FRONTIER: The eyed click beetle – a sight to see


With the summer upon us, a lot of creepy-crawlies will be coming out of the word work and garnering a lot of attention from surprised locals. One of those insects, the eyed click beetle (sometimes called the eyed elator), is a real attention-grabber – every year at least one of my Facebook friends posts a picture of the beetle on their page and asks “what is this thing?!” 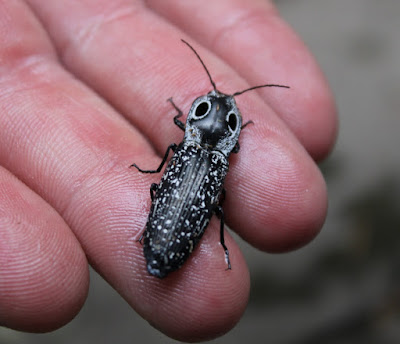 Such is to be expected; they are certainly a sight to see. They are not little beetles, they are 1” to 1 ¾” long, which is pretty big for a beetle in Niagara County. Their black body mottled with white is contrasted by two large eye-like spots on their thorax. Those eyes are likely a defense mechanism to frighten away its predators like blue jays and small mammals.

Eyed click beetles are fairly common in the area, but they are rarely seen as they spend most of their time on trees, under loose bark or in rotting timber. The adults eat very little but the maggot-like larvae known as wireworms have voracious appetites. The larvae can be found in soil or in rotting logs and they will feed on plant material but are more likely to consume small insects and other arthropods that they encounter in their travels. It should be noted that other species of click beetles (there are more than 800 of them in North America) are less predaceous and feed almost exclusively on plant roots – they can be especially damaging to crops like corn, cabbage and potatoes.

Click beetles are named as such because they have a secret power. If they fall onto their back or a predator flips them over, they have the ability to right themselves. What they do is arch their back and a fingerlike spine on their thorax nestles into a groove under the mesothorax. This makes a click noise that you can easily hear and the action catapults the beetle as much as 2 or 3 inches into the air and it will land upright on its feet. Smaller click beetles are more effective at doing that, so if you flipped over a larger click beetle, like the eyed elater, it might take him a few tries.

It’s a fun trick to watch and I encourage you to show it to kids. But be careful, all click beetles have pretty strong jaws and can bite. It’s not as painful or lingering as a bee or hornet sting, buts it’s still surprising nonetheless, especially for children. As you’ll see though in the photo, I’m holding one, so it’s not that bad.

Over the summer this column will look at more insects that, like the eyed click beetle, attract attention and can be a little unnerving to many people. As for all of these large and interesting insects -- don’t squish them. Appreciate them for what they are, an interesting part of the nature scene on the Niagara Frontier.