Exploring the Niagara Frontier: All Around the Mulberry Bush 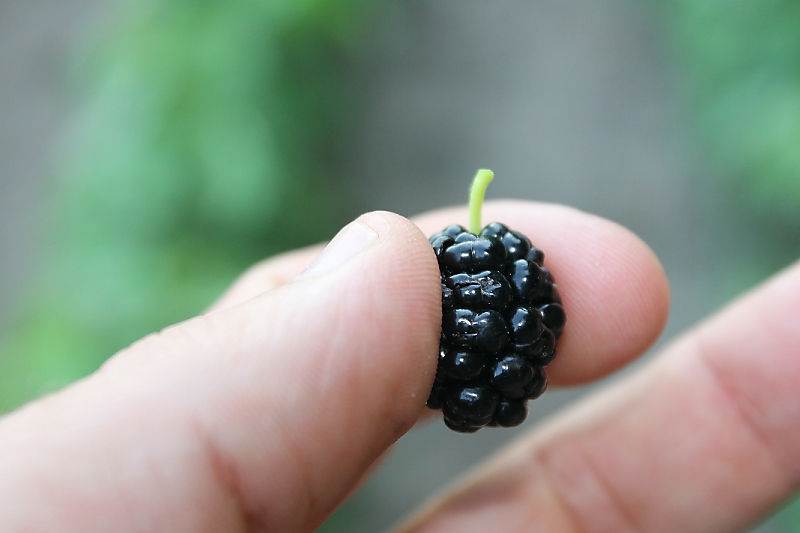 That means the month of July is special time for me and other wild locavores on the Niagara Frontier, as we are blessed with so many types of edible fruits in our forests and fields. From wild strawberries to black cherries to blackcaps, one’s palate can never be bored. Years like this, which have seen consistent rainfall from bud to flower to fruit, are especially bountiful and some plants seem overflowing with juicy fruits.

Among the most overlooked and underappreciated of these is the mulberry.

Not everyone has a taste for mulberries. My wife and daughter could do without them. As a matter of fact, just last week my two-year-old took a bite out of one, handed me the rest of it and in disgust said, “Here. You eat it.” She hasn’t touched one since.

Those of us who enjoy mulberries appreciate the subtle fleshiness of the fruit and the unforgettable flavor that is at once sweet and tart. They are so juicy that they often pop in your mouth when you bite into them.

Every year I collect the berries in volume and have a quarter-quart as my morning and afternoon snacks at work over their two-week peak.

If you do that, be sure to have a toothbrush handy in your desk as the juices tend to darken your teeth, just as they do your hands when picking and eating them.

Similarly, if you go out and pick them, be sure to wear old shoes that you can leave on your porch or in your mudroom. When mulberries are at their peak the ground below a mulberry tree will be littered with overripe berries and you will step on them. You don’t want to be bring that dye into your home and stain your carpets or woodwork.


Mulberry trees can be found mostly in the agricultural areas of Eastern Niagara County, especially those with dairy farms in the immediate vicinity. It won’t be often that you’ll find them in woodlots. 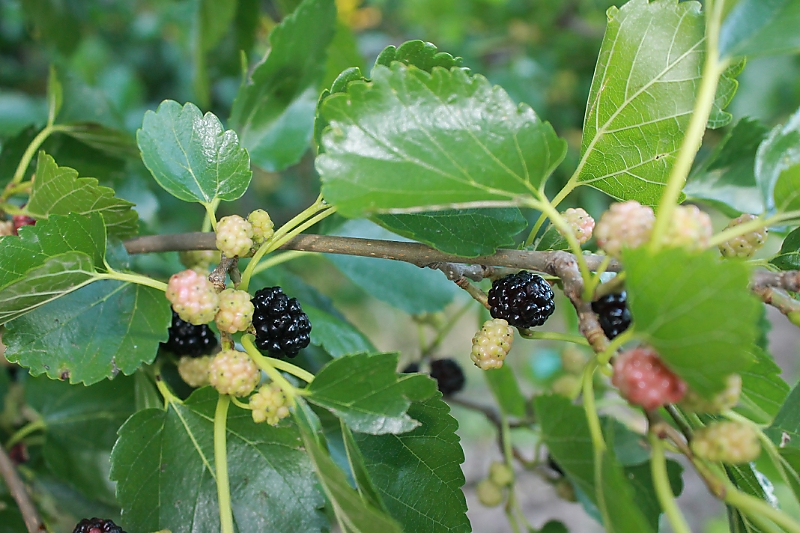 That’s because one of the greatest consumers of mulberries is the European starling. These pesky birds inhabit feedlots by the hundreds because they love to eat the corn and other grains that the farmers put out for their cattle. The starlings will wander away from the farm when mulberries are ripe and, if you don’t make periodic visits to your local mulberry tree, they will clean it completely of the berries.

If you want to find a mulberry tree, narrow your search to within a half-mile of a dairy farm and look for them in hedgerows and along “natural” hedgerows (like creek edges). These are places where the farm starlings will roost and defecate – it is their droppings that spread mulberry seeds and ensure future generations of trees. I guess starlings are good for something.

Mulberry trees can also naturally appear in lawns. That’s because the robin, one of our most common backyard birds, is an avid devourer of mulberries, and they, like starlings will plop the seeds in their stomping grounds.

Do you want a cue that there are likely mulberries in your neighborhood? Check the hood of your car this week or next. If there are bird droppings on it that are deeply purple, chances are your feathered friend had mulberries for dinner.


Mulberry trees are relatively short trees. They are 20- to 50-feet tall and can start producing fruit at about 15-feet in height (which is why you’ll need an a-frame ladder if you are serious about harvesting them).

The leaves are mostly oval or heart-shaped but they can also have a mitten shape and are typically three- to five-inches long and two- to three-inches wide. Mulberry leaves are also very glossy on the top. If you encounter the trees in the fall, the leaves will be yellow.

The bark of the trees is furrowed, even scaly, and not the least bit smooth.

The tree has a spreading crown (it doesn’t grow straight up like, say, a tulip tree) and has been known to be planted as a shade tree for that reason.

In the spring, mulberry trees produce greenish, spiked flowers than can be up to two-inches long. They gradually turn into fruits which first look white, become pink-red, and then turn a deep purple – almost black – when ripe. The fruits are one- to one-and-a-half-inches long. When picking them, a small bit of green stem will remain atop the fruit. That stem is edible and will do nothing to either improve or ruin the flavor of the fruit.

The fruits might start to become ripe around July 1, but really don’t become so until the second and third weeks of July. It’s rare that you will see any into August.


The red mulberry is native to North America and we are just at the very northern edge of its range. It is the one you are least likely to find in your travels in Niagara County. 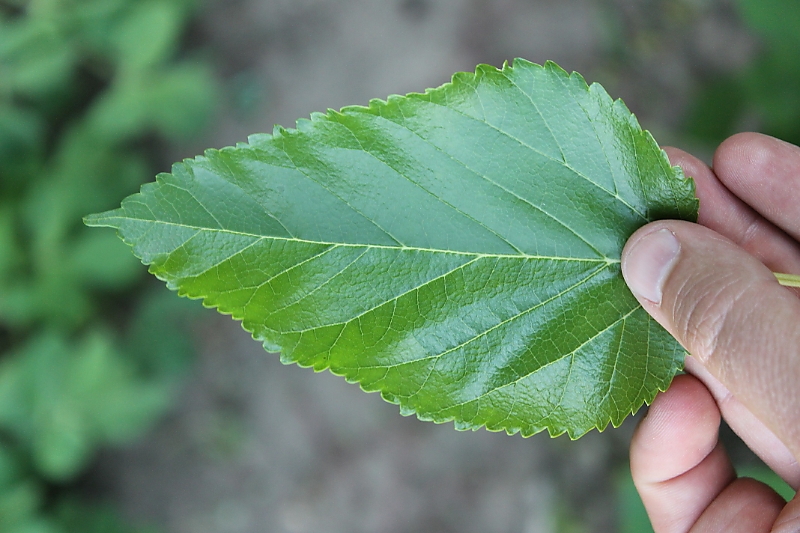 You will encounter its Persian cousin, the black mulberry, which was brought to the States to create a silk industry. Those who introduced them here failed to realize that silk worms love white mulberry leaves but have no care for black mulberry leaves. After failing in that regard, settlers decided to keep the trees anyway because of the delicious berries.

Mulberries aren’t berries, they are collective fruits. But for layman’s sake, throughout this column, I identified them improperly as people have for centuries.

It is highly encouraged that you thoroughly wash mulberries before eating them due to the likelihood of starling droppings on them. Starlings are not the cleanest birds.

Mulberries can eaten raw or put in pies, jams and jellies. They are quite tasty when served warm over dumplings/biscuits. My favorite treat is to top vanilla ice cream with them.


Bob Confer lives in rural Gasport where he doesn’t mind robins spreading their droppings in his lawn, hoping that they become mulberry trees. You can email him at bobconfer@juno.com . You can follow him on Twitter @bobconfer.