Exploring the Western NY Wilds: The turkey vulture – beauty is in the eye of the beholder

One of the signs of spring is the return to the local skies – and roadsides – of the turkey vulture. Called “buzzards” by old-timers, they are the most common local raptor, far outnumbering red-tailed hawks and Cooper’s hawks.

Most people are familiar with them. Many are even repulsed by them. But, beauty is in the eye of the beholder – they are interesting birds.

I say that people are repulsed because, up close, turkey vultures aren’t the most attractive birds in the world. Over the years, I’ve heard many people call them the ugliest bird they’ve ever seen.

That’s because of their bald head. Unlike the bald eagle with its white-feathered dome, turkey vultures truly are bald. The head is devoid of feathers and just as red as the meat that vultures consume. A young turkey vulture will have a black head in its first year.

It’s that naked head and neck that led to the moniker of turkey vulture as the turkey that fills our dinner tables also struts around with an unfeathered head.

Without feathers to add the appearance of mass, the vulture’s fleshy heads look small compared to the rest of their body.

Those bodies, though, are impressive. They are so dark brown that they appear black. And they are big: An adult vulture will be 27 to 32 inches in length, which makes them a half foot taller than a red tailed hawk. That’s huge in the bird world.

Their wingspan is huge, too. Their wings fully spread come in at 6 feet, making them an awesome sight in the skies. No doubt you’ve seen them in flight as they ride the thermals of Allegany County’s high country – with the tell-tale long “fingers” at the end of the wings which are held in a shallow “V.” It’s that “V” that makes the bird instantly identifiable from even a half mile away; that, and their habit of rarely flapping those wings — for long periods of time vultures will just ride the air currents and thermals, sometimes soaring for hours before a single wing beat. 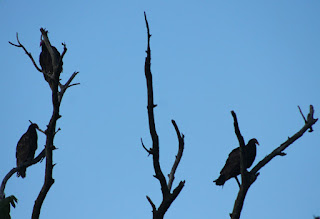 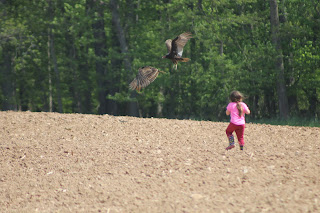 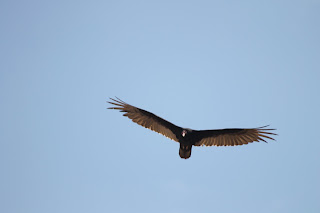 Turkey vultures are always soaring because they are constantly on the hunt for food. But, unlike other birds of prey, they lack the talons and claws (and the flight speed) necessary to kill small animals. Their feet look closer to those of a turkey than they do of a hawk.

Instead, they eat dead animals (carrion).

Believe it or not, turkey vultures really aren’t soaring the skies to look for carrion from above. They remain in the skies so they can smell the stench of the bodies as their scent wafts through the air.

Vultures have the most powerful sense of smell in the bird world, and maybe the entire animal kingdom. They can smell dead bodies from over a mile away and can even detect death in the air at only a few parts per trillion, which is almost implausible. While it takes some time for a dead creature to ripen before a human being can smell the rot of death, a vulture can smell animals that have been dead for as few as 12 hours.

Vultures don’t have impressive claws, but their beaks are incredibly strong. They can use them to tear apart the strongest of hides, like on a deer or cow, and can rip apart muscle and sinew like we would rip a piece of paper.

They jab their heads into the body cavities of the dead – even through their anuses -- and tear out the insides for their culinary delight. This is why they have bald heads --- the blood, undigested food, stool, and all similar gross stuff from the cadavers would stick to feathers and make for some serious discomfort. Chunks don’t stick too well to bare skin and a nice rain will give their mug a bath.

Vultures don’t get sick from eating dead animals and all of the bacteria and other goodies that come with them because of their natural defense mechanisms. The acid in their stomach is up to 100 times more powerful than that of other vertebrates and they have two specialized bacteria that live in their guts that can help fight other bacteria.

Benefitting from our car culture

The turkey vulture was rare in the northeast in the early 1900s but, around mid-century, they made a serious move north and saw their population explode. It had nothing to do with global warming and everything to do with America’s burgeoning car culture.

As more Americans bought cars and cars became faster, road kill became a normal part of the landscape. From house cats to raccoons to deer, vultures have a cornucopia of death to choose from. You will often see them in small groups roadside serving as nature’s clean-up committee, doing away with all of the bodies. Because of the availability of food, their numbers in New York State have grown at a rate of 6.4 percent per year over the past 30 years. That’s staggering growth.

Vultures also have a few more behaviors that lend themselves to repulsion.

Vultures will defecate on their legs. It was once believed that this was done to cool off their naked legs in the summer heat, but ornithologist now surmise after analyzing the fecal matter that the same bacteria and acids that protect their belly also act as a shield to infection. If the vulture has cuts and scrapes on its legs, that would allow sickness to enter its bloodstream and kill the bird, so it just poops on its legs and kills the offending bacteria.

Vultures will also puke defensively. If a coyote or fox comes too close to the body they are eating, they will projectile vomit onto the canines. That vomit contains the nasty stomach acids (so it burns, especially in the eyes) and the equally nasty contents of the belly (which don’t smell good at all). Baby vultures will also do this to anyone who visits their nest – so if you encounter a vulture nest on the ground, stay back about 5 feet or you will regret it.

From their faces to their dining choices to their defense mechanisms, turkey vultures can really be at once of the most disgusting and most interesting of our avian friends. So, the next time you see them at work on a road kill, take the time to appreciate those rather strange nuances. They are unique birds…to say the least.