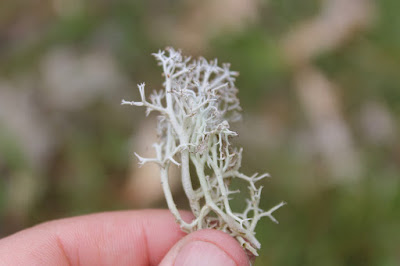 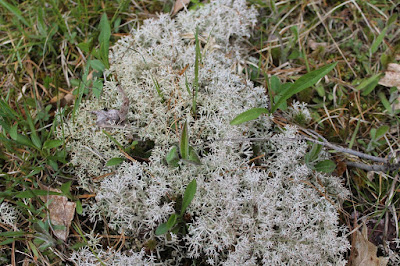 In the Far North of Canada, reindeer moss is an incredibly important food for caribou. It has been estimated that it provides 50% of the nourishment for the hoofed beasts in the summer months and 90% in the winter months.

While we aren’t the Far North, reindeer moss can be found in the higher peaks of Allegany County. Its greatest abundance – and even then, it’s quite uncommon – is had at elevations in excess of 2,000 feet in this area. That holds to the old naturalists’ adage that an increase in altitude is similar to an increase in latitude; the North is best replicated the higher you go.

Reindeer moss can be found in disturbed sites in those mountains, like parking areas, hunting camps, or logged-out forests. It can be identified by its small height (no more than 3 inches), light-grey, almost white, branched appearance, very dry and crunchy feel, and the small clusters that it grows in.

Despite its name, it is not a moss. It is a lichen. Lichens are best described as a symbiotic, composite organism comprised of both algae and fungi. You are likely most familiar with the bluish-green, plate-like lichens that grow on trees and logs.

It has been said that reindeer moss is edible and is a great survival food. It probably is classified as a survival food because you’d have to be in dire straits to eat it: It may be edible, but only in the loosest sense of the word. When sampled raw, it’s incredibly dry, like if you one day decided to munch on Styrofoam or straw. The flavor is moderately repulsive. Due to its heavy acid concentration, it is tart and best compared to the taste of a pill, like aspirin or Tylenol, if you bit into one.

Inuit have traditionally seemed to enjoy the flavor when it’s cooked. They first soak it with water, boil it a few times to get rid of the bad acid taste, crumble it, and then add it to breads, milk, and animal fats. It also makes a good thickener for soups and stews. After a few boilings and cooking, it is said to have an earthy, mushroom-like flavor.

Beyond that, it could serve some medical purposes. Inuit use boiled reindeer moss water to fight diarrhea and kidney stones. It has been used to dress wounds and it also makes for a good sponge.

Just how good of a sponge is it? It sucks up everything…including fallout. With Chernobyl in the news recently because of the war in Ukraine, consider this: In Scandinavia, the lichens absorbed cesium-137 from the Chernobyl disaster of 1986, making them, and reindeer that eat them, radioactive to this day -- 36 years later!

The next time you’re hiking the “high peaks” of Allegany County and encounter this strange plant (?), fungus (?), admire it as a sort of treasure from the Far North and don’t disturb any colonies of these lichens…while quite common in New York’s Adirondack Park, they are a very uncommon sight in Western New York.