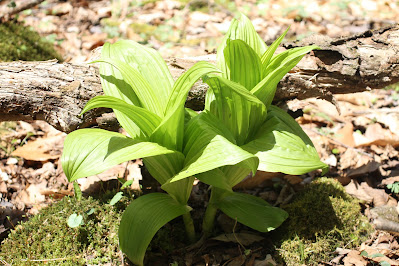 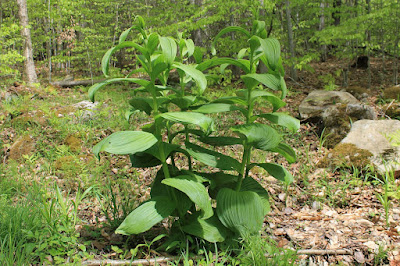 Every May, Allegany County hikers are caught off guard by a rather gigantic flowering plant that is unlike any other to be found this time of year. With its large leaves and impressive height reaching up to 5 feet, it is always a conversation starter.

The false hellebore can be found in damp areas with rich soils, such as meadows, stream beds, and woodland springs. In this county, it can be common in some valleys.

Deadly poisonings of humans are rare.

For starters, most people will puke it up before poisoning sets in.

And, not many people will indiscriminately eat a plant, especially one this large.

I say that, yet in 2020 -- when uninitiated hikers and newbie outdoorspeople ventured into the outdoors because of Covid lockdowns – Poison Control in Vermont alone received a record 25 calls for hellebore poisonings, some saying they confused the young leaves with leeks (In 2021, when the world started to get back to “normal”, Vermont had only 4 such calls).

While it rarely poisons people, it does, though, commonly poison farm animals.

The USDA routinely issues notices to ranchers about false hellebore with the biggest threat being to sheep. A poisoned sheep can be treated with epinephrine, but if a pregnant ewe eats it, even in small quantities which wouldn’t kill her, it can lead to serious health problems for her young and herself depending on when it occurs in the gestation period. Early in it, it can lead to “monkey-faced lambs," which have a protruding lower jaw, underdeveloped upper jaw, proboscis-like nose, and other deformities (Google it for some really disturbing sights). If it’s later in the gestation period, the baby sheep can grow at incredible rates before it is birthed and it will kill the ewe unless delivered by c-section.

Despite its destructive nature, Native Americans had uses for this deadly plant in very small amounts.

They used it as a means to show “who’s the boss.” If ever there was a problem with succession planning in certain tribes, groups of men would consume false hellebore and the last one to vomit was the leader because he showed he was the real man out of the bunch.

They also used it for medical purposes. Its primary purpose was to treat constipation and upset stomach – it was likely useful for both as it could quickly evacuate both ends.

If you see one of these beautiful, even exotic-looking, plants while exploring the Western NY wilds this spring, take the time to admire it and reflect on its histories and dangers. If you are a farmer, though, do what you can to remove it (roots and all) from your grazing areas.

It’s an interesting plant, for sure, but it can be a deadly one.