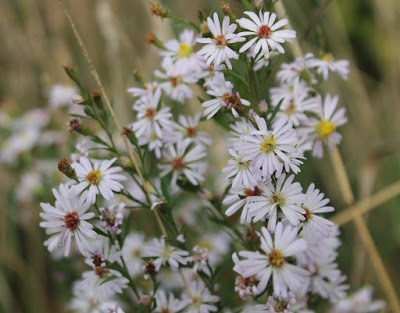 There’s a strange perception among folks that most any wildflower that blooms after June is a weed.

What all of that does is toss some disrespect the way of some truly beautiful plants. Among them are the asters.

These abundant bright plants run a gamut of colors, from white to yellow to lavender. They appear about month before our leaves change colors and can linger until the last of the leaves fall of the trees, supplementing our brash fall colors in the process.

The asters all feature star-like, multi-petaled flowers, appearing in bunches that can number from a half dozen to two dozen on one single plant (those plants can stand anywhere from one foot to six feet in height). Some flowers are no wider than a penny, while others are nearly the size of a half-dollar. They get their name from the Greek word “aster” which means “star”. 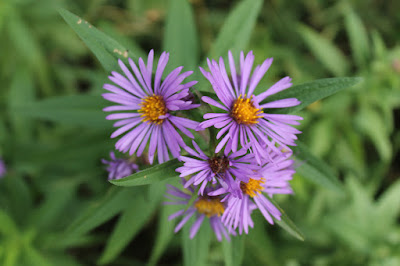 Asters come in many varieties. The average nature lover will have a difficult time telling them apart from one another because there are 180 species in the United States (60 in the northeast alone). It was once believed the number was closer to 600, but genetic studies done in the 1980s discovered that most were just variations of a species.

Regardless, the best known is the New England aster, the purple one shown in the accompanying photo.

This is one of the few species that actually gets some respect (everyone loves purple) and is purposely planted in gardens. These are the flowers often given to couples on their 20 th anniversary (under the moniker of “frost flower” because they can be found blooming well after the first frost). Asters are said to represent love and patience -- a husband and wife would need both to last 20 years together.

Other asters, like the white heath aster shown here, are despised by gardeners because they can spread quickly and overtake a garden. Heath asters have stems that are so strong that they’ve allegedly broken mower blades, hence a common name of “steelweed.”

I don’t find asters to be weedy in the least and I welcome their colorful appearance in my yard and on our farm.

And, so do butterflies. 30 species of butterflies and moths feed on the plants, making them absolutely critical to populations of these lovely flying insects that have really taken a beating in recent years due to modern agricultural pesticides. So, you are doing not only your eyes a favor by letting them grow, you are helping a class of insects survive some tough times.

So, this fall, and every fall thereafter, take some time to smell the flowers – or at least look at them. Far away and up close, asters offer some extraordinary beauty and their colors can really augment the scenery here on the Niagara Frontier.

From the 27 October All WNY News
Posted by Bob Confer at 7:05 AM